Erin Leigh Price is an actress who was a regular background performer in Star Trek: Voyager and also worked as photo double for Kate Mulgrew. Later, she also appeared in episodes of Star Trek: Enterprise. Price received no credit for her appearances.

Price appeared as a female vampire in the Buffy the Vampire Slayer episode "Listening to Fear" (2000), alongside Paul Hayes and stunt performers Edward Conna, Christopher Leps, Katie Rowe, and Scott Workman. In 2003 she worked on the short comedy Farm Sluts, with Brian Reddy and Leslie Jordan, and on the drama The Singing Forest. Other short prtojects include the crime comedy Influence (2002) and the horror film The Leftovers (2005). 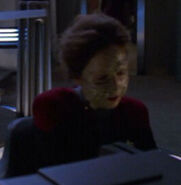 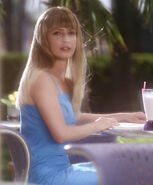 Elizabeth Tucker
ENT: "The Xindi", "The Forgotten"
(uncredited)
Add an image to this gallery

Retrieved from "https://memory-alpha.fandom.com/wiki/Erin_Price?oldid=2508814"
Community content is available under CC-BY-NC unless otherwise noted.