Devidian woman
Mercenary
Eugenie Bondurant (born 27 April 1961; age 60) is an actress from New Orleans, Louisiana, who appeared in three episodes of Star Trek: The Next Generation. She might be best known for her portrayal of Tigris in the fantasy sequel The Hunger Games: Mockingjay – Part 2. The film also features Trek alumni Robert Knepper, Michelle Forbes, and Joe Chrest.

Bondurant graduated from the University of Alabama and started her career as a runway model. She studied acting and has been teaching on-camera commercial workshops. Bondurant is a cancer survivor and motivational speaker for other people with cancer.

In 2019, Bondurant worked as associate producer on the short drama A Bright Second and in 2020 as director of the short comedy My Dinner with Steve. She also worked as producer and cinematographer on the film Three Dancers, Three Visual Artists, Two Filmmakers and One Piano Player (2020). 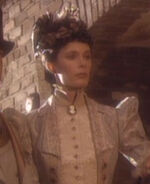 Español
Community content is available under CC-BY-NC unless otherwise noted.