Evan English (born 1 October) is the actor who started his Star Trek work as a background performer in Star Trek: Insurrection. English then joined the production of Star Trek: Enterprise on which he worked during the show's four-year run as the regular supporting character Ensign Tanner in addition to several other background aliens. Behind the scenes, he worked as the main stand-in for lead actor Dominic Keating, as well as for several guest actors. English and fellow background performer Tarik Ergin were also a stand-ins for the CGI-animated Xindi-Insectoid characters during the third season.

English was part of an extended deleted scene in sickbay for the episode "Minefield". Showing his stand-in work, he was featured in the ENT Season 1 DVD special features "Creating Enterprise" and "Enterprise Outtakes" and the ENT Season 2 DVD special feature "Enterprise Profile: Jolene Blalock". Several costumes worn by English were sold off on the It's A Wrap! sale and auction on eBay, including his alien pilgrim outfit from "Cold Front", [1] [2] two Klingon costumes, [3] [4] and his command division Starfleet uniform. [5]

English studied acting at Boston University and performed in the New York off Broadway plays "Love in a Taxi" and "In Your Dreams". He also had featured parts in episodes of The West Wing, Jack & Jill, and ER, in the science fiction comedy What Planet Are You From? (2000, with Ann Cusack, Willie Garson, Brian Markinson, and Wade Williams), the drama Almost Famous (2000), and the music drama Coyote Ugly (2000).

In 2009, English voiced the character of Captain Musaki on the fan produced web series Star Trek: The Continuing Mission. In 2015, he appeared as Randy in the short comedies The Adventures of Biffle and Shooster and The Biffle Murder Case where he worked with Jim Beaver, Daniel Roebuck, Dick Miller, Michael DeMeritt, Gary Tachell, Douglas Knapp, Dustin Courtney, Chris Doyle, and Dennis Madalone. 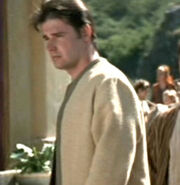 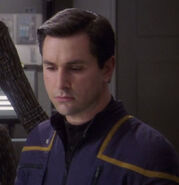 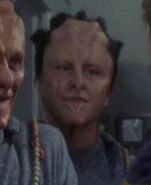 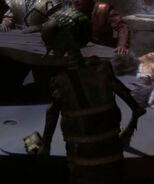 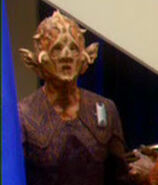