The decks of Excelsior-class Federation starship: 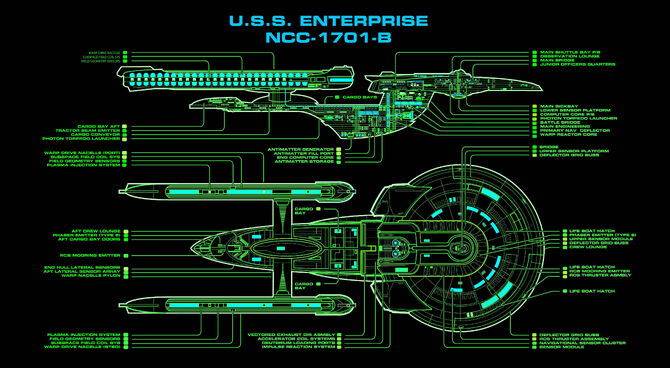 Most features here are derived from the Enterprise-B master systems display (MSD) production art, depicting the internal arrangement of all the decks of an Excelsior-class starship with several locations labeled. The graphic was prominently featured in Star Trek Generations on the Enterprise-B bridge set. The legible version of the graphic was published in Star Trek: The Next Generation Sketchbook: The Movies. The MSD was a creation by Scenic Artist Doug Drexler, who recalled, "I enjoyed laying cross sections out, and was proud that Mike [Okuda] thought I was the guy for the job." [1](X)

A design for a turbolift control interface okudagram for the Excelsior-class, done at Okuda's scenic art department, turned up later at auction in 2011, that had an alternative deck specification. The graphic listed the decks as follows:

The auction description did not specify for which production it was intended, though the configuration of the ship suggested it was intended for either Star Trek VI: The Undiscovered Country or the Star Trek: Voyager third season homage episode "Flashback". An annotation on the design read "Please Shoot 2 Film Negs 100%", indicating that a back-lit translite graphic was actually produced, though it was not seen in either production. Yet, in 1994 a modified (or original) version of the graphic, representing the refit-configuration of the class, was partially seen in the turbolift of the USS Enterprise-B in the scene where Admiral James T. Kirk enters in order to save the ship in the beginning of Star Trek Generations, though deck specifications remained unreadable. The original graphic design, measuring 30"×13.5" sold as Lot 228 in Propworx' STAR TREK auction of 4 June 2011 for US$200, having had an estimate of US$100-$200.

Retrieved from "https://memory-alpha.fandom.com/wiki/Excelsior_class_decks?oldid=2708406"
Community content is available under CC-BY-NC unless otherwise noted.