Exodus is a Pocket TOS novel – the second novel in the Vulcan's Soul series – written by Josepha Sherman & Susan Shwartz. Published by Pocket Books, it was first released in hardback in June 2006.

From the book jacket
Tensions remain high as the United Federation of Planets, the Klingon Empire, and the Romulan Star Empire attempt to maintain their fragile post-Dominion War peace in the wake of the brutal attack by the mysterious Watraii that ended with the loss of Admiral Pavel Chekov. When Admiral Uhura receives intelligence regarding a Watraii base that may contain more than one surprise, she sends Ambassador Spock, Captain Saavik, Ruanek, Captain Montgomery Scott, and Lieutenant Commander Data on a covert mission to learn its secrets…

But the true secrets of the Watraii have their basis millennia in the past. In the time of Surak, Vulcans were at a crossroads, on the cusp of either embracing logic or succumbing to emotion and destroying themselves. With Surak's blessing, a group of Vulcans left their turbulent homeworld to find their destiny among the stars – but the stars prove themselves even more unforgiving than the sands of Vulcan's deserts, as Karatek, the reluctant leader of the exiles, must struggle to hold the community together. 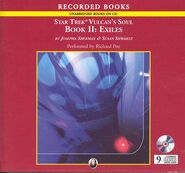 Retrieved from "https://memory-alpha.fandom.com/wiki/Exiles_(TOS_novel)?oldid=2710642"
Community content is available under CC-BY-NC unless otherwise noted.