From the book jacket
One year after the end of the Dominion War, the Romulan Star Empire comes under attack by a mysterious and alarmingly powerful enemy calling itself the Watraii, a species with a long-standing vendetta against the Romulans. Yet though they remain tenuously allied, the Federation, the Romulans, and the Klingons are unready to become embroiled in another sustained conflict, forcing Ambassador Spock, Admiral Uhura, Admiral Chekov, Captain Saavik, and some unexpected allies to defy their governments in order to meet the new threat head-on. But the first blood drawn may prove to be among the dearest of all.

Unknown to the defenders, the secret behind the Watraii's attack is buried in Vulcan's violent ancient past, during the time of Surak himself, when the proto-Romulans – staunch opponents of Surak's reforms – were compelled to take their chances among the cold and distant stars. Now Spock must begin the first leg of a long and dangerous road to learn the truth… before his hopes for the future become ashes. 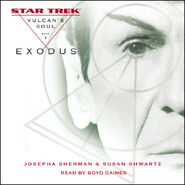 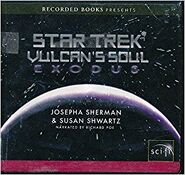 Canon characters listed below are linked to the main article about them. Non-canon characters are not linked, but those that recurred, appearing or being mentioned in more than one story, are defined further in Pocket TOS characters.
Spock
Uhura
Pavel Chekov
Saavik