The F-Toys Confect Co. Ltd. is a manufacturing company headquartered in Osaka, Japan that was established in 2001 by Toyohiko Furuta, following his retirement from Furuta.

Like Furuta, the company is widely known as a "gashapon" or "candy-toy" producer that has marketed many lines of figures and models over the years. Many of its products have been manufactured under license from major entertainment franchises, including Star Wars and Thunderbirds.

The ships were designed for F-Toys by FineMolds, a renowned Japanese modeling company, and were packaged with adjustable, individually-labeled stands. Typically, a small amount of assembly was required to display the ships on their stands.

A miniature of the mirror universe Enterprise NX-01 (seen in "In a Mirror, Darkly") was released as "secret" chase item, and was produced in smaller quantities and randomly packed into cases. 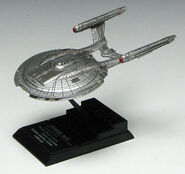 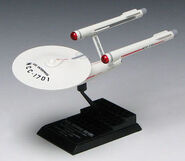 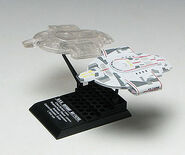 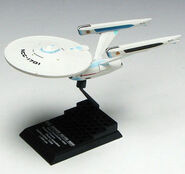 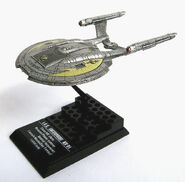 Case packaging
Add an image to this gallery

The ISS Enterprise, a repainted version of the USS Enterprise seen in "Mirror, Mirror", was retailed in limited quantities by Platz at the Wonder Festival 2010 convention in Tokyo, Japan (and briefly through the company's online store).[1] 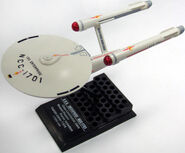 ISS Enterprise packaging
Add an image to this gallery

This set was a modified re-release ( or "reboot") of 2008's Star Trek Fleet Collection 1 where the USS Enterprise (refit) was replaced by the 2013 version of the alternate reality's USS Enterprise. A trading card was included with each release. No "secret" chase ship was issued with this set.

Appearing on the earlier version, this re-release of the Enterprise NX-01 omitted paint apps for the ship's panel lines and windows. 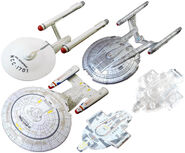 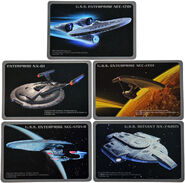 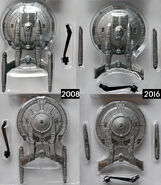 Retrieved from "https://memory-alpha.fandom.com/wiki/F-Toys?oldid=2675803"
Community content is available under CC-BY-NC unless otherwise noted.