Fallen Heroes is a Pocket DS9 novel – #5 in the numbered series – written by Dafydd ab Hugh. Published by Pocket Books, it was first released in February 1994.

From the book jacket
When a troop of alien warriors demands the return of an imprisoned comrade – a prisoner no one on Deep Space Nine knows anything about – Commander Benjamin Sisko has a deadly fight on his hands. Under sudden attack from the heavily armed warriors, Sisko and his crew struggle desperately to repel the invaders and save the lives of everyone on board.

Meanwhile, a strange device from the Gamma Quadrant has shifted Ferengi barkeeper Quark and Security Chief Odo three days into the future to a silent Deep Space Nine. To save the station they must discover what caused the invasion to take place, and find a pathway back through time itself.

The imprisoned comrade is, in fact, a piece of technology that projects a "temporal bubble" around a given space, and transports anyone inside it either forward or back 3 days. Quark had purchased the technology from a Gamma Quadrant trader and inadvertently tripped a homing beacon, which attracted the aliens. When Odo performs a "shakedown", Quark hits a button not knowing what it will do, which transports him and Odo three days into the future. There, Jake and Molly O'Brien are the only ones left alive (with Quark and Odo finding them after being transported into the future) and must solve the mystery of what happened. Quark does not realize that it was him for the longest time, and eventually has to admit to purchasing a stolen artifact. Once he does so, the party has to find a dead alien soldier's corpse, because they need a "key" to use the button on the artifact that sends them back into the past. It turns out that the only body they can find is of an alien that had died in the engineering room – and the engineering room has been engulfed in extreme heat and radiation because the reactor core had been damaged. Odo had to retrieve the "key" while withstanding the extreme heat and radiation. Odo must withstand the temperature of an M class star in order to retrieve the key, demonstrating the remarkable resilience of the shapeshifter race. Once the "key" is retrieved, Quark and Odo use the alien device to go back in time, returning just in time to intercept the aliens coming out of the wormhole, explain the situation, and surrender the technology to the aliens, who promptly return to the Gamma Quadrant. 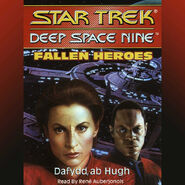 See Thule and Ultima Thule for other uses of this name.