An epic story that spans the generations…

Federation is a Pocket TOS novel – crossing over with the Pocket TNG series – written by Judith & Garfield Reeves-Stevens. Published by Pocket Books, it was first released in hardback in November 1994.

From the book jacket
At last! The long awaited novel featuring both famous crews of the Starships Enterprise in an epic adventure that spans time and space.

Captain Kirk and the crew of the USS Enterprise NCC-1701 are faced with their most challenging mission yet – rescuing renowned scientist Zefram Cochrane from captors who want to use his skills to conquer the galaxy.

Meanwhile, ninety-nine years in the future on the USS Enterprise-D, Picard must rescue an important and mysterious person whose safety is vital to the survival of the Federation.

As the two crews struggle to fulfill their missions, destiny draws them closer together until past and future merge – and the fate of each of the two legendary starships rests in the hands of the other vessel…

In the mid-21st century, while Zefram Cochrane's continuum-distorting fluctuation superimpellor – the first warp drive – changed history, Earth entered a difficult era: a deadly new fascist movement called the Optimum was on the rise, and worldwide war was simmering yet again. And although World War III would vanquish the Optimum for good, a few lived on, pursuing Zefram Cochrane across the galaxy – and across time…

The book begins on the time planet, at the Ellison research outpost around the time portal the Guardian of Forever, which fell silent and inert since shortly after Enterprise discovered it in the classic episode "The City on the Edge of Forever". An older James Kirk, grappling at 62 with retirement from Starfleet, is visiting the Guardian for a final time when his accompanying Vulcan researcher urges him to ask it a question for her. When it doesn't respond, she leaves Kirk alone in reverie with his regrets. Distracted and deep in thought, he idly whispers to himself, Why? – and unexpectedly, the Guardian answers…

Zefram Cochrane, just back from his 8-month, round-trip, historic first warp flight to Alpha Centauri, speaks with his friend and patron Micah Brack at a party in Cochrane's honor at the Christopher's Landing colony on Titan. Brack warns him that the Optimum, a burgeoning political movement eradicating people deemed genetically or ideologically inferior, has taken an interest in Cochrane's work, and that colonel Adrik Thorsen, its high-level operative, will land at Titan from Earth in a matter of hours. Brack is determined to release, royalty-free, the warp research he funded, knowing that Optimum's rise will prompt another bloody, planet-dooming war – and he wants that data to boost the founding of offworld colonies before all that, to prevent the extinguishing of mankind through war and preserve humanity's future. He sets up Cochrane in a clandestine extrasolar lab to develop his research outside Optimum influence.

Nearly twenty years later, Cochrane returns to Earth. The Optimum has seized power across most of the civilized world, suspending the constitution in America, imprisoning British royalty, and making sure everywhere to 'contain' "nonoptimals". Soon Thorsen has caught Cochrane and demands he explain how to build a 'warp bomb' from his superimpellor's continuum-distortion field.

It so happens that early in Cochrane's superimpellor research, a lunar accident at Kashishowa Station sparked an antimatter explosion, with an eighteen-meter spherical chunk of lab and equipment vanishing without trace of radiation. While Thorsen speculates about an even larger explosion being possible, the basis for a powerful bomb, Cochrane sees none. He explains how the 18m measure was immutably preordained: fixed by airtight mathematic equations, bound by the laws of physics, and constrained by the strength of the Sun's gravity well at Luna. This makes no bomb possible, Cochrane asserts, because nature prevents it from being enlarged or weaponized – but Thorsen refuses to believe it.

After far too long in space he is rescued by the energy being known as the Companion, which brings him to its home planetoid of Gamma Canaris N, unwittingly falls in love with him and, after contact with Kirk and the Enterprise crew, inhabits the body of dying Federation commissioner Nancy Hedford to live out its newly mortal life with him.

Years later Enterprise, under Kirk's command, is called to answer for a mysterious transmission from the Companion Nancy Hedford, who needs help finding a lost Cochrane. They find him in Optimum hands, rescue him and, to escape the Optimum, plunge toward a black hole.

In the 24th century, Picard and crew seek out what they think is a Borg artifact from a Ferengi in a Romulan warbird, an artifact now being held by dissident Romulans as a bargaining chip to guarantee help in leaving their empire. After interference from a loyal Romulan warbird, Enterprise secures the artifact in its shuttlebay.

It proves a fake, save for a Preserver artifact inside. When the Preserver item is hooked up to the ship's computer, a maliciously viral worm program infects it, floods the ship with anesthizine gas, and aims the helm at the same black hole Kirk, in the past, is headed toward. Next, the worm vents the shuttlebays to space, nearly killing Picard, La Forge, and Wesley Crusher, the three placed there by Data in a shuttle for safekeeping. Taking an antidote and shuttling to the bridge, Data tries disabling the program, is infected instead – then orders the others to call him Thorsen, threatening anyone who disobeys.

At the black hole they find the Oberth-class USS Garneau, whose captain explains they're to collect a special science package put there 99 years ago. Thorsen wants to enter the black hole and orders Worf to destroy the Garneau; when Worf refuses, Thorsen fires on the Garneau himself and, so occupied, allows Kirk's Enterprise to dive for the singularity instead. Inside, the mother and son Crusher shut Data's body down.

As a consequence of singularity physics the Kirk and Picard Enterprises are engulfed by the same black hole. Neither can communicate with one another to preserve their timelines, but Enterprise-D soon rescues Cochrane and both ships escape the Optimum; when Picard destroys an ancient artifact containing all that is left of him, Thorsen's consciousness is finally eliminated.

The only way to heal the dying Companion is to return to her planetoid; but, by this time, her absence has caused it to break apart. Cochrane and the Companion face no other option than give in to death. They give themselves over to a cloud of light, as witnesses Picard and Beverly Crusher find relief in the restful peace they have succumbed to.

Fast forward to just after Enterprise-D is lost at Veridian: Picard, with Riker on Titan, reads a letter written to him before his birth. It's from Kirk – at long last, chronicling the entire affair for Picard.

And ending, as we began, back at the Guardian, we see in turn that it – in answer to his question – has chronicled the entire affair for Kirk…

"How surprising. I thought he would be the stiff-upper-lip type. 'So sorry to bleed on your carpet.' That sort of thing."

"When Starfleet hears about this, I don't know if they're going to give you a medal or a court-martial"

"Though we have drawn on established Star Trek lore for many of the events in this book, we must add that much of the early history of the Federation, and Cochrane's adventures prior to and after inventing the warp drive, are extrapolations solely of our own creation and thus could be superseded by official adventures in the years to come."

- the authors, in their "Acknowledgements" section 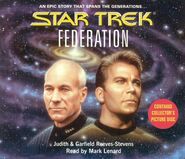 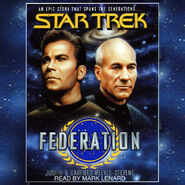 Canon characters listed below are linked to the main article about them. Non-canon characters are not linked, but those that recurred, appearing or being mentioned in more than one story, are defined further in Pocket TOS characters.. The story contains many Pocket TNG characters.

Nancy Hedford
Flint
62nd Rule
Algeron's Tears
City of Utopia Planitia
USS Excalibur
Grigari
J.P. Hanson
McKnight
USS Garneau
Robert Wesley
Tom Harris
USS Lexington
USS Excalibur
Starbase 324
Starfleet insignia
One scene (pp 137-139 in the paperback edition) has a captive Cochrane explaining to villain Adrik Thorsen the principle behind warp drive. He starts by drawing a star and explaining that the line bisecting it represents light speed. He then draws a high, symmetrical curve, saying that it represents the infinite power needed to reach warp speeds under general relativity. Then he draws a much lower, asymmetric curve, with its peak after the imaginary light-speed line, stating that it represents the power usage of warp drive. The resulting graph strongly resembles the Starfleet emblem, especially as seen in Star Trek: The Original Series; later in the book, Captain Picard refers to the symbol as the "Cochrane delta".
Titan
Wolf 359

Retrieved from "https://memory-alpha.fandom.com/wiki/Federation_(novel)?oldid=2452116"
Community content is available under CC-BY-NC unless otherwise noted.