Grand Nagus of the Ferengi Alliance

Despite a strong spirit of laissez-faire regarding commerce, the Alliance maintained numerous agencies to regulate Ferengi business and trade. Though ostensibly created to oversee Ferengi business practices and ensure adherence to regulation, these agencies appeared to be constructed as much to create opportunities for graft, bribery and corruption as any legitimate purpose.

The Ferengi Commerce Authority (or FCA) was an agency of the Alliance concerned with business practices and the enforcement of trade under Ferengi Trade By-Laws and Code. Agents of the FCA were known as Liquidators, led by the Board of Liquidators, all of whose offices were located on the 40th floor of the Tower of Commerce in the Sacred Marketplace on Ferenginar. (DS9: "Family Business")

The Ferengi Health Commission oversaw health regulations in Ferengi businesses and public life and had the ability to revoke a Ferengi's trade license. (VOY: "Infinite Regress")

Domestically, advancement in Ferengi government was based on bribery and patronage. A Ferengi who aspired to a higher position in any government agency, in particular the FCA, was expected to earn a large profit not just for himself but for his superiors. Even seeking an audience with a senior government official required a donation of latinum. (DS9: "Family Business")

Generally, the Ferengi Alliance stayed neutral in the politics of the galaxy, since the Ferengi were solely interested in profit and making enemies diminished possible business opportunities. In the spirit of free enterprise, most Ferengi business ventures were made without the knowledge of the government. As a result, while a number of hostile conflicts occurred between the Federation and the Ferengi in the 2360s, the Ferengi Alliance itself was not considered responsible. (TNG: "Bloodlines")

The Ferengi Alliance has never actually fought in any large-scale interstellar war, which Quark considers an accomplishment which makes it morally superior to even the Federation. (DS9: "The Jem'Hadar") Generally, when the Ferengi Alliance comes into conflict with another galactic power, they peacefully apply economic pressure using their considerable financial resources (raising or lowering trade restrictions, etc.) until they can force the other power to agree to a peace treaty at the negotiation table, preferably one in the Ferengi Alliance's favor. (DS9: "The Siege of AR-558")

The Ferengi Alliance maintained official neutrality during the Dominion War, though it believed its natural business interests to lie with the Alpha Quadrant powers. Similarly, during the Occupation of Bajor the Ferengi took no sides and traded equally with the Cardassians and Bajorans. (DS9: "Business as Usual")

The official practice of neutrality, however, did not guarantee the Alliance favorable relations with all races. The Klingons were known to despise Ferengi in almost all circumstances, despite no history of bad relations between the two governments. However, even as a neutral power, the economic might of the Ferengi Alliance gave them significant influence in the galaxy.

The Ferengi Alliance maintained a military which consisted mostly of D'Kora-class marauder craft. The military was used to protect the business ventures of various Ferengi entrepreneurs, not to wage war. A Marauder was usually commanded by a DaiMon who was authorized to open new trade negotiations on behalf of the Alliance. (TNG: "The Last Outpost", "The Price")

The logo and tattoo was designed by Michael Okuda. According to production work from the first season of TNG, no chevron indicated a regular crewmember, one chevron indicated a salesman, third class; two chevrons were worn by salesmen, second class and three chevrons (the third one wider than the regular two) would have indicated a salesman, first class, similar to an assistant manager. The last version of the tattoo was never seen on the show. The first civilian (and therefore untattooed) Ferengi seen was Omag. All the Ferengi seen on DS9 were civilians and none of them wore tattoos. 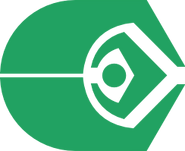 two chevrons (DaiMon)
Add an image to this gallery

Retrieved from "https://memory-alpha.fandom.com/wiki/Ferengi_Alliance?oldid=1280070"
Community content is available under CC-BY-NC unless otherwise noted.