Fighter Pods is a game and line of toys which Hasbro first produced in 2012 using the G.I. Joe, Star Wars, and Marvel licenses.

Typically, the game invites the contestants to "battle" each other using transparent spinning "pods" that have been propelled from a launcher vehicle. Each pod contains a miniature figure.

In 2012, Hasbro announced that they would produce licensed Fighter Pods for Star Trek Into Darkness and slated them for release during the following year. In May 2013, Hasbro began to release Star Trek Fighter Pods exclusively through the Toys "R" Us retail chain. [1] 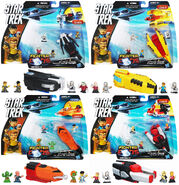