James Doohan, with Leonard Nimoy as the voice of Spock

Final Frontier is a Pocket TOS novel – the third "Giant" novel – written by Diane Carey. Published by Pocket Books, it was first released in January 1988.

From the book jacket
This is the story of a hero – and a moment forever lost to history.

It is a tale of Starfleet's early days, of a time before the Star Trek we know. The story of a secret mission gone horribly wrong – and an instant in time where the galaxy stood poised on the brink of one final, destructive war. It is the story of a ship since passed on into legend, and a man we know only as the father of Starfleet's greatest captain.

His name is Kirk. Commander George Samuel Kirk. He is a warrior, born and bred to battle. Now destiny has placed the fate of a hundred innocent worlds on his shoulders.

James T. Kirk has returned to his home in Riverside, Iowa. The Enterprise has just returned from a mission; the Guardian of Forever sent Leonard McCoy to the year 1930, a painful scenario ending with the death of Edith Keeler. He finds a cache of letters his father wrote, nearly 25 years earlier, in his childhood possessions on the Kirk family farm.

Shrugging off attempts by Dr. McCoy to discuss his preoccupation with the tragedy in 1930, Kirk begins to read.

Commander George Kirk is the security chief on Starbase 2. While writing to his sons, Kirk notices trouble on the video monitor, in the public lounge area. Lieutenant Francis Drake Reed is in trouble, having attempted to hustle some players at the pool table. Kirk rescues him, and the two split Reed's loot, and discuss Kirk's letters to home.

Suddenly, the two are jumped by a woman in a surgical mask, rendering them unconscious with cloths moistened with a powerful sedative.

Hope and a Common Future

Nine years after the events of the Rosenberg rescue, Captain Robert April makes an address to the UFP general assembly, announcing his retirement from command of the Starship Program. He mentions that there are now five Constitution-class starships in the fleet, with seven more under construction. He lists the examples of USS Potemkin, USS Farragut and USS Excalibur, mentioning that the military sounding names are overridden by the class name, taken from the United States Constitution, speaking to the aim of creating "domestic tranquility while providing for the common defense" – of all lifeforms. He announces passing on command of Enterprise to Christopher Pike.

The epilogue lists the aftermath of the incident in the Zone and the fate of those involved. No log was ever filed or discussed relating to an encounter with Romulans. As far as Starfleet is concerned, there was no contact made by the unnamed starship on a mission to rescue SS Rosenberg.

T'Cael takes to a life as a Human, in disguise as "Cale Sandorsen," a statesman who ends up setting many precedents and making detailed recommendations for Federation first contact procedures and ambassadorial ethics between races.

George Kirk is assigned as Sandorsen's security chief, allowing him to spend more time near Earth with his family. Shortly after Jim Kirk becomes a junior midshipman at Starfleet Academy, the ship George and Sandorsen are on vanishes with no trace on a diplomatic assignment. 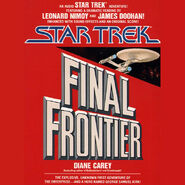 James T. Kirk
Captain of the Enterprise in 2266. In 2243, he was a young boy approaching his 10th birthday, reading letters of his father's exploits in Starfleet. One of the promises young Jimmy's father made to him was that he would find out what his middle initial stood for.

The story lists Kirk as approaching his tenth birthday while the Enterprise is undergoing prototype shakedown testing – this indicates a date of 2243, two years before the ship would be commissioned.