Flanagan was born Fionnghuala Manon Flanagan in Dublin, Ireland, and trained at Dublin's Abbey Theatre. Her most notable work is the tour de force "James Joyce's Women", in which she played six different roles. On TV, her most notable work was How the West was won, where she played Molly Cullhane for 12 episodes and was nominated for the Primetime Emmy Award as Outstanding Lead Actress in a Drama Series. This show also featured Harris Yulin, Richard Kiley, Ricardo Montalban and, for one episode, William Shatner.

Other notable roles include Catarine in the 1984 Star Wars spinoff television movie The Ewok Adventure. Film audiences may also remember her appearance as the housekeeper Mrs. Mills in the 2001 thriller The Others, or for her prominent role in John Singleton's Four Brothers. She also played a recurring role as Eloise Hawking in seasons three, five and six of Lost, with Daniel Dae Kim, Terry O'Quinn, Sam Anderson, and Alan Dale.

More recently, Flanagan portrayed the recurring role of former mayor Nicolette "Nicky" Riordon in eight episodes of the first season of SyFy's science fiction series Defiance in 2012/2013. Gary Hutzel, David Takemura, and Doug Drexler worked on the visual effects for this series and Allan Kroeker directed Flanagan in one episode. In 2017, she co-starred in the Irish-British miniseries Redwater. In the same year, she appeared in an episode of Bryan Fuller's American Gods, directed by Adam Kane and featuring Chris Obi. 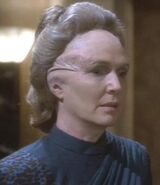