A corpse, the result of a botched assimilation, was found by Chakotay, Tom Paris and Neelix in a Borg assimilation chamber after they were captured by a Borg cube manned by five Borg children. (VOY: "Collective")

This Borg was portrayed by background actor Mark Major.

Several deactivated Borg drones were found in the corridors of First's cube in 2376 after being infected with a pathogen. One of them was beamed aboard Voyager's sickbay where it was examined by The Doctor. (VOY: "Collective") 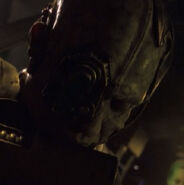 Played by Patrick Barnitt
Add an image to this gallery

This infant was discovered by the crew of the USS Voyager on a damaged Borg cube in 2376 after being infected with a biological weapon. The infant was beamed to Voyager to receive treatment. (VOY: "Collective")

This infant appears to have been puppeteered.
According to Brannon Braga, the infant was returned to her people off-screen.
[1]; Star Trek Encyclopedia (4th ed., vol. 1, p. 362)
Retrieved from "https://memory-alpha.fandom.com/wiki/First%27s_cube_personnel?oldid=2193325"
Community content is available under CC-BY-NC unless otherwise noted.