Flag of the United States of America

The flag of the United States of America, also known as the American flag, was a patriotic banner that symbolized that region of Earth from the 18th to the 21st century. The design of the United States flag remained mostly unchanged over the nation's four hundred years, with the exception of the number of stars which appeared on it. Each star represented the number of states that were united under the flag. Between AD 2033 and 2079, the US flag had 52 stars. (TNG: "The Royale")

Newsreel footage of the American and Nazi flags, only flown together in an alternate timeline 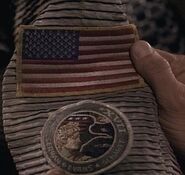