A flashlight was a hand-held, self-contained device used for illuminating darkened areas. It was similar to the palm beacon and SIMs beacon. (TNG: "The Game"; VOY: "Night")

In 1947, Lieutenant General Rex Denning used a flashlight to search Quark's ear for a universal translator. He was unable to find it. (DS9: "Little Green Men")

Starfleet was equipped with flashlights in the 22nd century as seen using by crewmembers of Enterprise NX-01 on several occasions in 2151. (ENT: "Terra Nova", "The Andorian Incident") 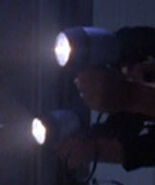 Andorians also made use of flashlights. (ENT: "The Andorian Incident")

The Takret Militia soldiers used flashlights aboard Enterprise while the main power was offline. (ENT: "The Catwalk")

The four members of the rape gang on Turkana IV used flashlight to find Natasha Yar. She experienced this memory again while being trapped in a galaxy near the end of the universe in 2364. (TNG: "Where No One Has Gone Before")

Yar and Data used small flashlights when they beamed aboard the USS Stargazer's bridge. (TNG: "The Battle")

Retrieved from "https://memory-alpha.fandom.com/wiki/Flashlight?oldid=2287036"
Community content is available under CC-BY-NC unless otherwise noted.