Forcas III was the inhabited third planet in the Forcas system of the Beta Quadrant.

In another quantum reality, Worf only achieved Ninth Place, due to the judges ignoring his opponent's use of an illegal T'Gha maneuver. In another, he could not attend the competition and his younger brother Kurn went in his place. (TNG: "Parallels")

Forcas III was the origin of a drink that Guinan served in Ten Forward on the USS Enterprise-D. When Data tried this drink, during one of his first experiences with his emotion chip, he described the Forcas III drink as "revolting" (and immediately agreed to an offer for more). (Star Trek Generations) 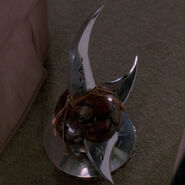 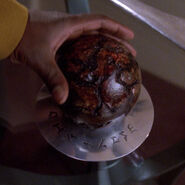 This planet was only mentioned in dialogue.

Although it hosts a bat'leth tournament and might therefore be part of the Klingon Empire, the location and affiliation of Forcas III has never been stated on screen.

According to Star Trek: Star Charts (p. 64) and Stellar Cartography: The Starfleet Reference Library ("Federation Historical Highlights, 2161-2385"), the Forcas system was located in the Beta Quadrant. The system's primary was a K-class star.

Forcas III is mentioned as one of The Albino's past whereabouts in the novel Excelsior: Forged in Fire. Taking place in 2409, the computer game Star Trek Online requires the player to participate at a bat'leth tournament on Forcas III for the House of Martok.