Ford trucks were a type of truck manufactured by the Ford Motor Company during the 20th century. They were powered by an internal combustion engine.

In 2371, the crew of the USS Voyager discovered a fully functional 1936 Ford truck floating through space in the Delta Quadrant. When brought aboard, Lieutenant Tom Paris stated, "It's a 1936 Ford, actually. That was the manufacturing date, 1936. Ford was the name of the company that build it. Antique vehicles are a hobby of mine." (VOY: "The 37's")

The Star Trek Encyclopedia (4th ed., vol. 1, p. 280), in the entry "Ford pick-up truck", described the vehicle as being "used to transport small to medium payloads across land distances of several kilometers, often for light industrial or agricultural applications." 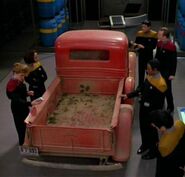 An overview from the rear
Community content is available under CC-BY-NC unless otherwise noted.
Advertisement