Brent
Vinci
Various other characters
Frank "Buddy" da Vinci (14 February 1933 – 4 June 2013; age 80) was a Chicago-born actor and stuntman who worked as Leonard Nimoy's stand-in and background and stunt performer on Star Trek: The Original Series. His nickname, according to William Blackburn, was "Buddy." The Star Trek Concordance and derivative works occasionally list him as "Bud da Vinci".

Da Vinci started out as a male model in his hometown, then moved to Hollywood, where he pursued a career in film. First, he worked as a tour guide at Warner Bros. and in the studio's publicity department. Here, he also met actor and dancer George B. Ellsworth, who became his life-long partner.

Da Vinci was a stand-in and double for Anthony Perkins in Alfred Hitchcock's classic Psycho, which was written by Joseph Stefano, based on a novel by Robert Bloch, and featured John Anderson in the cast. Da Vinci's silhouette can be seen in the famous shower murder scene. (citation needed • edit)

Da Vinci appeared (uncredited) in the 1964 The Man from U.N.C.L.E. episode "The Project Strigas Affair", which featured both William Shatner and Leonard Nimoy, and was directed by Joseph Sargent. A year later, he appeared in the episode "The Secret Sceptre Affair", which also featured Jack Donner and William Boyett, was directed by Marc Daniels, co-produced by Sam Rolfe, and had a musical score by Jerry Goldsmith. [1](X)

After Star Trek was cancelled, da Vinci continued to be Nimoy's stand-in for two seasons of Mission: Impossible. He appeared on screen in the first two parts of the three-part episode "The Falcon", as the uncredited character named Sebastian. For most of the two episodes Sebastian was disguised as Nimoy's character Paris (Nimoy actually applied the mask disguise on to da Vinci's face). The episodes also featured Lee Meriwether, Logan Ramsey, Jack Donner, Dick Dial, and Charles Picerni, and the voice of Robert C. Johnson.

Da Vinci left acting in the 1970s. Along with Ellsworth, he owned and operated two gay night clubs in Los Angeles. He passed away due to renal failure on 4 June 2013. The same year, the Pepperdine University of Malibu founded the "Frank James 'Buddy' da Vinci and George B. Ellsworth Scholarship", awarded to applicants who empathize service and volunteerism dedicated to improving the mental and physical health of the LGBT community. [2](X) 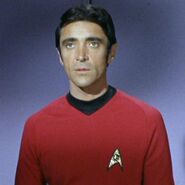 Hand double for Michael Strong
TOS: "What Are Little Girls Made Of?"
(uncredited) 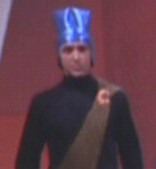 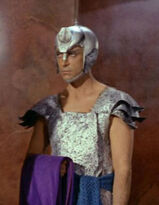 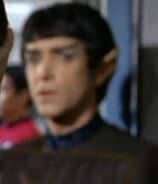