Ensign Froman was a weapons officer aboard the USS Enterprise from 2258. He was trained at Starfleet Academy, and served in the role of tactical officer during Kirk's third attempt at the Kobayashi Maru scenario.

He was later posted on the bridge of the Enterprise following a distress call from Vulcan. (Star Trek)

A year later, Froman was serving at the auxiliary operations station on the bridge. He was present when the USS Vengeance attacked the Enterprise and when the ship crashed into San Francisco. Like all the other bridge officers, Froman did not leave his station when Spock gave the order. (Star Trek Into Darkness)

Credited as Jonathan Dixon for playing the "Simulator Tactical Officer" in Star Trek, Jonathan H. Dixon received credit for playing Ensign Froman in Star Trek Into Darkness.
A behind the scenes picture of Dixon is used for card #14, "Ensign Froman", of the virtual collectible card battle game
Star Trek: Rivals. 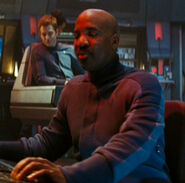 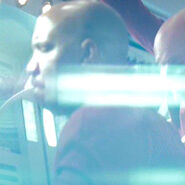 ...working on the Enterprise bridge in 2258
Add an image to this gallery
Retrieved from "https://memory-alpha.fandom.com/wiki/Froman?oldid=2421214"
Community content is available under CC-BY-NC unless otherwise noted.