A fruit was the ripened ovary of a flowering plant. Many foods that were treated as vegetables in cooking were actually botanically fruits.

In April 2151, the transporter aboard Enterprise NX-01 had been cleared for bio-transport, which Malcolm Reed took as meaning fruits and vegetables, but Travis Mayweather informed him it was cleared for beaming Humans. (ENT: "Broken Bow")

Enterprise NX-01 also had a hydroponic greenhouse to grow fruits and vegetables for the ship's mess hall. (ENT: "Breaking the Ice")

In 2364, Groppler Zorn offered Commander William T. Riker something from a bowl of Earth fruits. Riker asked for an apple, but there was none available. The Farpoint Station entity then created a second bowl filled with red apples. (TNG: "Encounter at Farpoint")

One of the Bandi merchants at Farpoint Station sold fruits. (TNG: "Encounter at Farpoint")

The Aldeans had a variety of fruits. They presented them in bowls and on plates. (TNG: "When The Bough Breaks")

In 2369, a bowl of fruits rotted because of collision with a temporal fragment. (TNG: "Timescape")

The first meal of the inhabitants of Meridian consisted mostly of fruits. When Jadzia Dax tried to eat one special fruit, Deral showed and told her that the trick is to remove the pulp and eat the thin layer inside the rind. (DS9: "Meridian")

According to the call sheet for the day of filming, a "meat looking fruit" was used. The call sheet also notes a "plate of vegetables (Sola)". 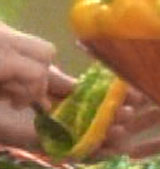 Meridian fruits
A call sheet for the Star Trek: Voyager first season episode "Prime Factors" listed a "Kalbissian fruit" in the props section for scenes in the mess hall. However, no further identification was given.
In the first draft script of ENT: "Fusion" (which had the working title "Equilibrium"), Trip Tucker mentioned to Fraht that fruit (or nuts) was occasionally mixed up with sugar to make candy.