The Furuta Confectionery Co., Ltd. is a candy manufacturer and industrial supply company that is based in Osaka, Japan and was founded in 1952.

The company produced two licensed Star Trek gashapon candy-toy lines between 2003 and 2006. F-Toys, another gashapon manufacturer, was founded by Toyohiko Furuta in 2001, following his retirement from this company.

In 2003, Furuta produced its first small-scale injection-molded plastic models of Star Trek starships and space stations as Volume One of the Star Trek Federation Ships & Alien Ships Collection. Volumes Two and Three followed in 2004 and 2006, respecively.

Notably, aside from producing many commonly manufactured Star Trek starships, Furuta also produced ships that had been rarely touched upon by other licensed companies before. These included a Species 8472 bio-ship and a Prometheus-, Olympic-, and Nova-class vessel.

The models were pre-painted, well detailed for their size, and were "snap-fit" models that required no glue for assembly. Each item included a display stand. All of the standard items were sold in "blind boxes" that did not disclose their specific contents on their exteriors. The first two volumes included a collectible trading card with each model. 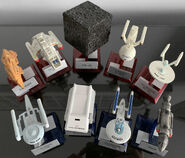 Furuta released the Star Trek Pins Collection in 2006 as a gashapon line of enamel pins, featuring twenty unique insignia from the Star Trek franchise. Each insignia pin was packed inside of a "blind box" and came with a display stand. 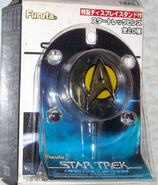 Bandai is the company that trademarked the term "gashapon" for the combination of candy with a toy model, together in a single package. The name is derived from the sound of the cranking of the dispensing mechanism ("gasha") added to the noise that the box makes when it falls out of the vending machine ("pon").

The term "gashapon" has become very common in Japan as a generic term for all manufacturers of these "candy-toys" and has also come to be identified with "blind box" trading figures, product lines of small-scale toys, figurines or models that are sold in identical sealed boxes. Commonly, many gashapon boxes must be purchased to complete a toy series, as collectors will inadvertently purchase many duplicate items.

Gashapon are now commonplace in Japan and many candy companies include toys with their products as enticers, often packaged in such a way that they can be dispensed from vending machines. In the case of some companies, the candy is included so that their toys can be sold on supermarket shelves as food items.

Rarer "secret" or "chase" items are often included in a series to boost sales and are produced in smaller quantities than the regular items in the series. This method of collector-focused marketing has a strong resemblance to trading cards sales methods. Typically, a gashapon line is a single and unrepeated release which can cause the more sought-after releases to become highly valued collector's items.