Dynarski acted in numerous film and television projects, most notably Steven Spielberg's 1971 debut thriller Duel, which was written by Richard Matheson (based on his own short story) and featured Charles Seel and Carey Loftin, and the highly acclaimed 1976 drama, All the President's Men, which co-starred Stephen Collins, F. Murray Abraham, Richard Herd, Nicholas Coster, and Paul Lambert. In 1997 he made two appearances on Seinfeld (with Jason Alexander) as Izzy Mandelbaum, Jr. 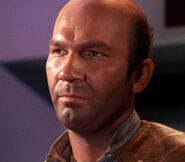 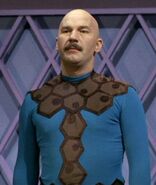 Krodak
TOS: "The Mark of Gideon"

Retrieved from "https://memory-alpha.fandom.com/wiki/Gene_Dynarski?oldid=2531570"
Community content is available under CC-BY-NC unless otherwise noted.