Geoffrey Mutch is an actor who worked as background performer on I AM ERROR and I AM ERROR. His first Trek work was standing-in for Jonathan Frakes on the sixth season episode "The Quality of Life" in 1993. He then worked as photo double for Jonathan Frakes in the sixth season episode "Second Chances" in 1993 [1](X) and was featured as a security officer in the season cliffhanger "Descent". He worked again as stand-in for Jonathan Frakes on the seventh day of filming on "Descent". Mutch continued to work as a regular background actor in about forty episodes of Deep Space Nine. [2]

Mutch started acting in 1982 when he joined The Starfire Singers, a theater group and appeared in his first play, "One Flew Over the Cuckoo's Nest". He moved to Los Angeles in 1992 and joined the Screen Actors Guild while working on Star Trek. He moved to San Francisco in 1996 and participated in several stage plays, then in 2001, he relocated in Monterey. Still working in stage plays and at the Shakespeare festival in Carmel in 2005, he also started to appear on several science fiction conventions such as the Starbase Indy in Indianapolis. [3] [4]

In 2007 he appeared in the film Plausible Deniability along fellow Trek actress Menina Fortunato. [5] 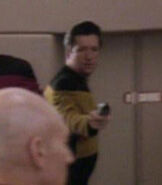 Security officer
TNG: "Descent"
(uncredited)
Add an image to this gallery
Retrieved from "https://memory-alpha.fandom.com/wiki/Geoffrey_Mutch?oldid=2209037"
Community content is available under CC-BY-NC unless otherwise noted.