George Sawaya (14 August 1923 – 17 September 2003; age 80) was an actor and stuntman. Most of his nearly one hundred movie roles and television guest roles were very small parts. In 1975, Sawaya appeared again with William Shatner in The Devil's Rain. He worked steadily from the middle 1950s to the early 1980s. He is the father of fellow Star Trek stuntman Rick Sawaya. 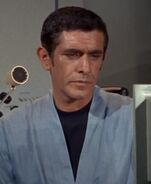 Klingon crewman
TOS: "Day of the Dove"
(uncredited)
Add an image to this gallery

Retrieved from "https://memory-alpha.fandom.com/wiki/George_Sawaya?oldid=2697952"
Community content is available under CC-BY-NC unless otherwise noted.