The following is a list of Germany armed forces personnel:

In an alternate version of 1944 where the Nazis had invaded much of the nations on Earth, the German Wehrmacht Generalmajor was briefed by Vosk in the American White House. The German flag officer was worried that the war effort might require more money and was responsible for relaying orders from Hitler to the Na'kuhl. He was subsequently killed by Vosk. (ENT: "Storm Front", "Storm Front, Part II")

The unnamed general was played by Christopher Neame.
In the final draft script of "Storm Front", he was described simply as "a high-ranking German general".

Two Nazi SS guards were stationed in the office of the Generalmajor. When the general relieved Vosk of command of the facility, the Na'kuhl leader shot the general. The general's two guards attempted to fire their own weapons, but they were killed by a Na'kuhl officer before they succeeded. (ENT: "Storm Front, Part II")

Played by Tom McComas
Add an image to this gallery

The SS Untersturmführer was in charge of transporting Jonathan Archer to a prison camp in an alternate timeline. In this alternate version of 1944 the Nazis had invaded the United States. He told Archer that Americans were good at making movies with stars like Betty Grable, Rita Hayworth, and Veronica Lake but not at fighting. He said that he wanted to go to Hollywood to meet Grable. Archer said that he did not believe that he was her type. His convoy was attacked by the American resistance, and he was knocked unconscious by Archer, who made his escape. (ENT: "Zero Hour", "Storm Front")

These Nazi guards guarded the compound in which Vosk and the Na'kuhl conducted their research. They were attacked by Carmine and his men and hit by bullets. (ENT: "Storm Front, Part II") 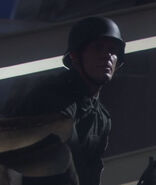 Played by Trampas Thompson
Add an image to this gallery

This Nazi was harassing Jonathan Archer and Alicia Travers when they were walking in the streets in front of Alicia's apartment in New York. His SS rank was Unterscharführer. (ENT: "Storm Front")

The SS Untersturmführer was played by Sonny Surowiec.

This Nazi was harassing Jonathan Archer and Alicia Travers when they were walking in the streets in front of Alicia's apartment in New York. (ENT: "Storm Front")

The soldier was played by Dieter Horneman, who also played a Nazi guard in VOY: "The Killing Game".

The Nazi SS soldier was guarding Jonathan Archer when he was being transported to a prison camp in an alternate timeline. In this alternate version of 1944 where Nazi Germany had invaded America. The convoy was attacked by the American resistance, and the soldier was killed. (ENT: "Storm Front")

The soldier was portrayed by an unknown actor.

Two Nazi accompanied Vosk to his meeting with Jonathan Archer to discuss Archer's interference in the Temporal Cold War, and to discuss the release of Trip Tucker and Travis Mayweather who were prisoners. (ENT: "Storm Front, Part II")

The guards were played by unknown actors.

Nazi soldiers under the direction of the Gestapo were clearing out entire buildings and shooting people on the street or taking them away in trucks for interrogation in their search for Jonathan Archer. (ENT: "Storm Front")

Most of the guards were played by unknown actors, and one was played by Mark Chadwick.

The Nazi doctor was in charge of a German hospital tent in America. The Nazis had invaded America and had the upper hand in the War. The doctor called his superiors in to view a patient with burns who was wearing an unfamiliar uniform. The patient was Jonathan Archer who had been transported into the past after destroying the Xindi weapon. The past had been changed by the Na'kuhl, a faction in the Temporal Cold War. (ENT: "Zero Hour")

The doctor was played by Gunter Ziegler.

Two SS agents were order to take Trip Tucker and Travis Mayweather for interrogation as Vosk believed that they were temporal agents. They later carried the two into a small holding cell after the demanding interrogation. (ENT: "Storm Front", "Storm Front, Part II")

The Nazi SS agents were played by unknown actors.

These Nazis were seen by Kirk and Spock via images recorded from the Guardian of Forever. They appeared in an alternate timeline, created by Doctor McCoy saving the life of Edith Keeler in 1930. (TOS: "The City on the Edge of Forever")

Add an image to this gallery
These Nazis were "played" by unknown people, who appeared via stock footage.
Retrieved from "https://memory-alpha.fandom.com/wiki/Germany_armed_forces_personnel?oldid=2529429"
Community content is available under CC-BY-NC unless otherwise noted.