Giant in the Universe

View source
watch 01:43
DC Fandome - The Loop
Do you like this video?
Play Sound
Real World article
(written from a Production point of view)

The USS Enterprise orbits a gigantic unidentified planet. Kirk, Scotty, and Spock beam down to the planet and are captured by a tremendous giant and placed under glass jars. Kirk tried to reason with the giant, telling him "We did not come here to harm you. We came to explore this planet," but the giant could not hear him through the thick glass jar. The three melt the glass jars with their phasers and scatter across the table. They were too fast for the giant to catch and manage to have Uhura beam them back to the Enterprise. Kirk tells Spock to put the planet on the starmap and to tell headquarters about the giant.

This eight page pop-up book was the first Star Trek pop-up book released by Random House. It contained 4 pop-ups, each with a page of story opposite. 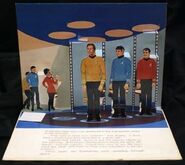