Gina Gallante, today known as Gina Saadi, is an actress who appeared as a science division officer aboard the USS Sutherland in the Star Trek: The Next Generation fifth season episode "Redemption II". She filmed her scenes on Friday 12 July 1991 on Paramount Stage 9. Gallante later appeared as a scientist on Melona IV in the fifth season episode "Silicon Avatar" for which she filmed her scenes on Wednesday 7 August 1991 on location at the Golden Oak Ranch and on Thursday 15 August 1991 on Paramount Stage 16.

Gallante was scheduled to appear in scene 6 of the fifth season episode "Unification I", a corridor scene, and in a sickbay scene of the episode "Ethics". These scenes were not part of the final episodes, however. She was also scheduled to appear in corridor and Ten Forward scenes in the episode "The Perfect Mate" but was not part of the final episode. Gallante was listed on the call sheet for the fourth day of filming on the seventh season episode "Phantasms", Monday 23 August 1993, as a patient in sickbay but did not appear in these scenes.

Hailing from Youngstown, Ohio, she is today known as Gina Saadi and is living in Los Angeles, California where she is working as actress for the Commercial Talent Agency.

In 1993 she had a featured part in the thriller The Vanishing, with George Hearn, Kristopher Logan, and Leonard Kelly-Young. 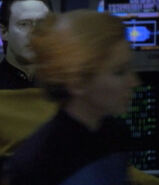 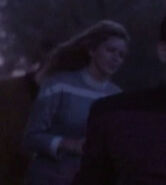 Enterprise-D nurse
TNG: "A Matter of Time", "Hero Worship", "Violations", "Conundrum", "Power Play", "Imaginary Friend", "The Next Phase", "Realm of Fear", "The Quality of Life", "Ship in a Bottle", "Face of the Enemy", "Starship Mine", "Dark Page"
(uncredited)
Add an image to this gallery

Retrieved from "https://memory-alpha.fandom.com/wiki/Gina_Gallante?oldid=2415134"
Community content is available under CC-BY-NC unless otherwise noted.