Bajoran slave laborer; Vori commando; Kyrian commando
Glenn Goldstein is a stuntman and stunt actor who was a background stunt actor in several episodes of Star Trek: Deep Space Nine and Star Trek: Voyager. In addition he worked as a production assistant for several weeks on a location shoot for Star Trek: First Contact. Goldstein received no credit for his work. Trousers worn by Goldstein in one of his appearances were sold off on the It's A Wrap! sale and auction on eBay and were also worn by Ethan Phillips. [1]

Goldstein received a Bachelor of Fine Arts in Film (producing, directing, acting, minor writing) from the University of Syracuse and has been a Star Trek fan. He studied acting under Doug Warhit, has doubled for stars such as Colin Farrell and Joseph Fiennes, and has performed in music videos for artists such as Dr. Dre and in video games such as Wing Commander IV.

Among his stunt work are the television series Boston Public (starring Jeri Ryan) where he worked as a stunt double in a car chase, Pacific Blue, Seinfeld (starring Jason Alexander), Power Rangers, Cold Case, NCIS, Alias (2002, with Terry O'Quinn and Joseph Ruskin and stunt work by Shauna Duggins), created and produced by J.J. Abrams, and JAG (2003, with Alicia Coppola, Zoe McLellan, and Vyto Ruginis and stunt coordinated by Diamond Farnsworth). 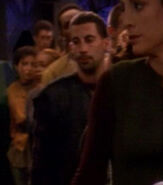 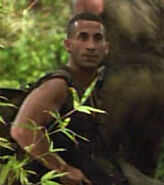 Retrieved from "https://memory-alpha.fandom.com/wiki/Glenn_Goldstein?oldid=2700626"
Community content is available under CC-BY-NC unless otherwise noted.