George Murdock
Laurence Luckinbill (Sybok guise)
"Is this the voice of… God?"
"One voice – many faces."
– Leonard McCoy and "God", 2287 (Star Trek V: The Final Frontier)

This entity claimed to be God, but was actually a malevolent noncorporeal being discovered by the Vulcan Sybok and the crew of the USS Enterprise-A in 2287. It was imprisoned on a planet located within the Great Barrier at the center of the galaxy, which was believed by Sybok to be Sha Ka Ree, of Vulcan mythology.

In 2287, this being assumed the identities of several mythological figures, including the God of Sha Ka Ree to lure Sybok and the Enterprise to its location so that the starship could free it from imprisonment. "God" asked for the ship to help it spread its "wisdom" through the universe. Though Sybok wanted to oblige, Captain James T. Kirk was suspicious of its motives, and asked why "God" would need a ship. In response, "God" shot energy beams from its eyes at the Starfleet captain.

Spock tried reinforcing Kirk's point only to be shot as well. "God" asked Leonard McCoy if he doubted it too. The doctor responded, that he doubts any God who inflicts pain for its own pleasure. "God" then revealed it had been a prisoner on the planet and wanted to escape. He changed into a form mimicking Sybok, to mock the foolish Vulcan for his arrogance, informing him also that the vision of it being a God was created only by Sybok's own imagination.

Realizing his mistake, Sybok sacrificed his life by thrusting himself into the entity, so that the Enterprise crew could escape. Kirk ordered a photon torpedo to be fired, killing Sybok, but not the entity, who was only incapacitated for a few moments. Enraged, the entity attempted to kill the remaining three. Kirk had Spock and McCoy beam away, leaving himself to the mercy of the entity. Manning the weapons of a Klingon Bird of Prey, Spock fired upon the entity, hurting or possibly destroying it, and rescued Kirk from the planet. (Star Trek V: The Final Frontier)

The Faces of God

After appearing, the God assumed several shapes, before settling on the one it felt "would better suit your expectations". 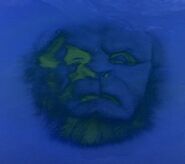 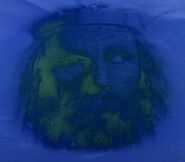 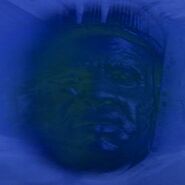 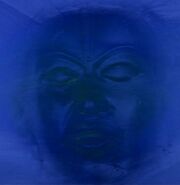 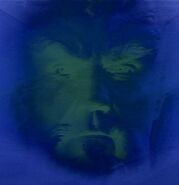 The Human image portrayed by the "God of Sha Ka Ree" from Star Trek V was portrayed by actor George Murdock. The image of the Andorian god, as well as the other two unidentified gods (shown below), were among the images shown to represent the "many faces of God" in Star Trek V.

The images represented below are from art and make-up tests from Star Trek V. 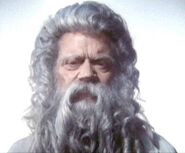 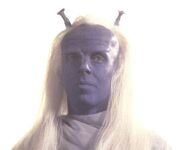 According to Q Continuum series of novels by Greg Cox, the Sha Ka Ree entity was known as "The One," and was exiled to the center of the galaxy for causing a civil war centered around the premature destruction of the legendary Tkon Empire millennia before being rediscovered by Sybok and the crew of the Enterprise-A. He was an associate and contemporary of 0 (pronounced "Nil", as in nothing), the Beta XII-A entity, or (*) as 0 referred to it (used in type because its real name was apparently unpronounceable, or even incomprehensible, by Humans), and Gorgan in this endeavor.

The One was referred to by 0 as the entity "who invented Monotheism." He was not originally of this plane and was summoned to this universe via the Guardian of Forever. After causing chaos among the Tkon Empire, he was subsequently defeated and his body destroyed by the combined efforts of Q2, the female Q, and the Q who became known as Quinn; only his head remained, and that was subsequently sealed away by the Q Continuum at the center of the galaxy until his repentance or the heat death of the universe – whichever came first – while 0 was sealed outside the galaxy by the galactic barrier for all eternity.