Graffiti (singular graffito) were images placed on a surface in public view. The typical medium used was aerosol paint products. This form of self or group expression was usually done without permission of the surface's owner, with the intent of defacing the surface affected. Such activity was considered a crime in many jurisdictions, including Deep Space 9. (DS9: "The Circle", "Crossfire")

Graffiti was visible on a metallic box beside an advertisement Sulu, Scotty, and Dr. McCoy examined when trying to figure out how to make a whale tank while visiting San Francisco in 1986. More was seen on a window on a bus upon which Kirk and Spock rode. These graffiti markings were popular in the 20th century. (Star Trek IV: The Voyage Home)

Graffiti was also visible in an alleyway in 1996 Los Angeles. (VOY: "Future's End")

Graffiti was often used to convey a political message. Members of the Alliance for Global Unity did so by spraying the symbol of their group on Deep Space 9 in 2370. Their intent was to let both the Bajoran and Starfleet crew know of their presence. It was seen in at least two places on the station, including the door of Benjamin Sisko's crew quarters. (DS9: "The Homecoming")

Ojuy Gel was arrested in 2372 for spraying graffiti to protest the visit of First Minister Shakaar Edon to the station. Afterward, he was sentenced to three weeks of community service for his crime. (DS9: "Crossfire")

After a diplomatic misunderstanding on Gelrak V in 2380, some Gelrakians defaced the exterior hull and interior corridors of the USS Cerritos with crystal graffiti. A Starfleet Type 2 phaser could be used to easily remove it. (LD: "Temporal Edict")

As revealed at a panel of assorted Discovery designers at Fan Expo Canada in 2018, the set for the Qo'noS cabaret from "Will You Take My Hand?" included some graffiti, including "Your mother has a flat forehead". [1]

Graffiti on the Enterprise

An example of graffiti on Deep Space 9 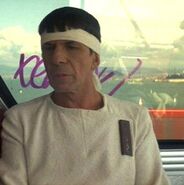 Retrieved from "https://memory-alpha.fandom.com/wiki/Graffiti?oldid=2551734"
Community content is available under CC-BY-NC unless otherwise noted.