The Great Hall was a building in the First City on the planet Qo'noS, homeworld of the Klingons. By the late 24th century, the Klingon High Council had met there for hundreds of years.

In 2366, Starfleet Lieutenant Worf was brought to the Great Hall of the Klingon High Council to face discommendation in light of evidence that his father was responsible for the Khitomer Massacre of 2346. (TNG: "Sins of the Father")

In 2367, Captain Picard completed the Rite of Succession at the Great Hall when he named Gowron as the next chancellor of the Klingon Empire despite the efforts of the Duras sisters Lursa and B'Etor. (TNG: "Redemption")

In 2371, the Council gathered in the Hall to discuss the fall of the House of Kozak. (DS9: "The House of Quark")

The ancient Klingon city of Qam-Chee also contained a great hall which was the site of Kahless and Lukara's marriage, and a subsequent attack by forces loyal to Molor. (DS9: "Looking for par'Mach in All the Wrong Places") 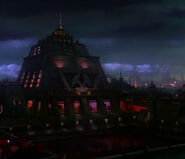 The Great Hall interior in 2366

The complete name of this room has not been revealed in canon. In "Sins of the Father", Kurn begins to state the full name of this hall, the "Great Hall of", when he is interrupted by Worf.

The design of the Klingon Great Hall (and other sets in "Sins of the Father") won an Emmy Award for Best Art Direction for Star Trek: The Next Generation production designer Richard James and TNG set decorator Jim Mees. The latter production staffer later recalled, "We created the [...] set at a time when the TNG production team was still formulating who the Klingons really were. The beautiful part of this process is that the writers gave us the parameters of the story, and let Richard and me take it from there." (Star Trek: Communicator issue 152, p. 32; Star Trek Encyclopedia (4th ed., vol. 1, p. 317))

The Great Hall interior set was built on Paramount Stage 16. ("Redemption" call sheets) The exterior of the Great Hall and the surrounding First City was a matte painting created by Syd Dutton at Illusion Arts. (Encyclopedia, 4th ed., vol. 1, p. 317)

To film the Great Hall's interior for "Redemption II", Director David Carson had to make do with only half the set. "We weren't able to rebuild the whole Hall like we had before," stated Livingston. "It was tough to cover. They had to turn people around. We changed the tapestry on the back wall, a lot of cheats like that." (Cinefantastique, Vol. 23, No. 2/3, p. 58)

The Great Hall appeared to become smaller in DS9: "The House of Quark" than it had been in TNG. Gowron actor Robert O'Reilly remarked, "Moving it from one stage to the other seems to have caused it to shrink. But the real reason for the shrinkage was the filming of Voyager. The new sets take up so much room they couldn't spare the space for the Great Hall so it's now about a third the size it once was." (Star Trek: Communicator issue 104, p. 54)

Retrieved from "https://memory-alpha.fandom.com/wiki/Great_Hall?oldid=2407241"
Community content is available under CC-BY-NC unless otherwise noted.