Gregory Itzin (born 20 April 1948; age 74) is an actor who has appeared in five episodes spanning three spin-off series of the Star Trek franchise. He was first cast as either Whalen or McNary in the Star Trek: The Next Generation first season episode "The Big Goodbye", but dropped out in favor of doing an episode of L.A. Law instead, something he later expressed regret for. [1]

Outside of Trek, he may best be known for his Emmy Award-nominated role as Vice President (and later President) Charles Logan on the hit Fox TV series 24. His co-stars on this series have included fellow Trek veterans Jude Ciccolella, Glenn Morshower, Roger Cross, Peter Weller, Ray Wise, Tzi Ma, Daniel Dae Kim, Tony Todd, Raphael Sbarge, John Berg and Tom Wright. He once again popped up on the show for its sixth season in 2007, during which time James Cromwell, Maury Sterling, and Itzin's Star Trek: Deep Space Nine co-star Alexander Siddig were also members of the cast.

He also earned a Tony Award nomination for his role in the 1993 Broadway play The Kentucky Cycle, during which he acted alongside fellow Trek actors Scott MacDonald and Randy Oglesby.

In 2010, he starred in the audio drama The Physicists, produced by LA Theatreworks, co-starring Harry Groener, John de Lancie and Bruce Davison.

He also has a number of made-for-TV movies to his credit. In 1983 he was seen in The Other Woman, along with future Star Trek: Voyager star Robert Picardo. In 1998 he appeared along with Wil Wheaton, Donna Murphy, and Titus Welliver in The Day Lincoln Was Shot. And in 2003 he was one of the few Star Trek performers who appeared in DC 9/11: Time of Crisis, in which he played US Attorney General John Ashcroft. His co-stars included Penny Johnson, Stephen Macht, Lawrence Pressman, and Star Trek: The Original Series star George Takei.

Itzen appeared on the CBS series The Mentalist as California Bureau of Investigation director Virgil Minelli. He also reprised his role as Charles Logan in Season 8 of 24. Most recently, he has appeared as Senator Dwyer in Big Love, Dick Barrows in Desperate Housewives and Henry Wilcox in Covert Affairs.

Itzin is also no stranger to feature films, either. He made his debut in the medium with a role in the acclaimed 1980 disaster film spoof Airplane! (also featuring Jonathan Banks, Kenneth Tobey, and Jason Wingreen). This was followed in 1989 with a supporting role in The Fabulous Baker Boys, co-starring Albert Hall and Dakin Matthews.

One of his largest roles came in the 1995 family movie Born to Be Wild, co-starring Alan Ruck, Titus Welliver, and Star Trek: Enterprise star John Billingsley. Since then, he has had supporting roles Fear and Loathing in Las Vegas (1998, with Larry Cedar, Jenette Goldstein, and Richard Riehle), Small Soldiers (1998, with Kirsten Dunst, Dick Miller, Robert Picardo, and Wendy Schaal), What's Cooking? (2000, with Alfre Woodard), Evolution (2001, with John Cho, Miriam Flynn, Michael McGrady, Jennifer Savidge, and Sarah Silverman), Original Sin (2001, with Joan Pringle), and Adaptation (2002, with Jim Beaver), among others.

More recently Itzin appeared in a leading role in the drama Float (2008), again playing husband and wife with Cristine Rose. Kyla Kuhner served as co-producer for this film. Itzin later acted alongside Mark Harelik, Jack Kehler, and Ron Perlman in The Job, a film which premiered at the San Diego Film Festival in September 2009. He can currently be seen in the action thriller Law Abiding Citizen, which also stars Star Trek: Voyager guest actor Bruce McGill and TNG/DS9 regular Colm Meaney.

He also appeared in the Steven Spielberg film Lincoln (2012), documenting the efforts of President Abraham Lincoln to abolish slavery during the American Civil War, again appearing with Bruce McGill, as well as Grainger Hines and Dakin Matthews.

Itzin was one of sixteen working character actors interviewed for the 2012 documentary That Guy... Who Was in That Thing. Several of the actors featured had made appearances in various Star Trek episodes (a fact the documentary notes), including Bruce Davison, Zach Grenier, Robert Joy, Stanley Kamel, Matt Malloy, Mark Rolston, William Morgan Sheppard, Wade Andrew Williams, and Rick Worthy. 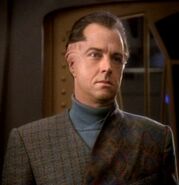 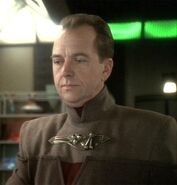 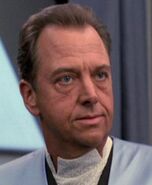 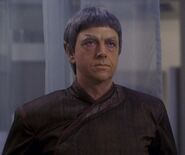 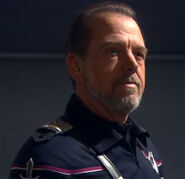