Bolian Enterprise-E engineer; Hirogen; Klingon crewman; Enterprise-E officer
Gregory R. Sweeney is an actor who was featured in two Star Trek films and several episodes of Star Trek: Voyager. As a background performer Sweeney received no credit for his appearances.

Sweeney was born in Manhattan and attended the University of Scranton where he graduated with a degree in English literature. To follow his passions acting and music he moved to Los Angeles where he worked as teacher for the Los Angeles Unified School District and produced music for commercials. Sweeney earned his SAG card while working on Star Trek: First Contact.

He trained acting at the T. Schreiber Studio in New York, under Jock McDonald at the Cameron Thor Studios East in New York, under Harry Maestrogeorge in Los Angeles, under Valerie Colgan at the City Literary Institute in London, and under Laila Robbins at the HB Studios in New York. Beside his work on Star Trek, Sweeney was featured in the NBC series Hope and Gloria and the BBC series Jeeves and Wooster and portrayed the leading role in the independent film The Promise (2004).

More recently he appeared as the evil scientist and the terrorist in the science fiction/comedy web pilot Chad and the Alien Toupee along with Tim Russ, Robert Picardo, Patrick Barnitt, and Stephen Blackehart. [1]

Today Sweeney and his brother Matthew are working as songwriters with BMI and ASCAP publishing. 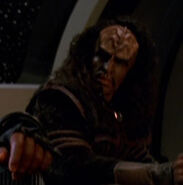