Gregory Wagrowski (born 4 April 1956; age 64) (known earlier in his career as Grzegorz Wagrowski) is an actor who played Vulcan Captain Solok in the Star Trek: Deep Space Nine seventh season episode "Take Me Out to the Holosuite" and Ceris in the Star Trek: Enterprise third season episode "Chosen Realm". His costume from "Chosen Realm" without the vest was later sold off on the It's A Wrap! sale and auction on eBay and was previously worn by Alexander Slanger in the second season episode "The Breach". [1] [2]

Wagrowski guest starred with William Shatner and James Darren in the T.J. Hooker episode "The Obsession". Primarily a stage actor and director, Wagrowski co-starred with Robert Beltran in "Stars in the Morning Sky" at the Los Angeles Theatre Center and with Andreas Katsulas in "Zastrozzi" at the Public Theater. 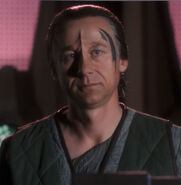 Ceris
ENT: "Chosen Realm"
Add an image to this gallery

Retrieved from "https://memory-alpha.fandom.com/wiki/Gregory_Wagrowski?oldid=2464763"
Community content is available under CC-BY-NC unless otherwise noted.