Gulliver's Fugitives is a Pocket TNG novel – #11 in the numbered series – written by Keith Sharee. Published by Pocket Books, it was first released in May 1990.

From the book jacket
While searching for the USS Huxley, missing for more than 10 years, the Enterprise stumbles across a forgotten colony of Humans on a planet called Rampart, where fiction and works of the imagination of any kind are considered a heinous crime. A survey team beams aboard the ship to search for "contraband," and the crew are drawn immediately into a vicious civil war between Rampart's mind police and a band of determined rebels. 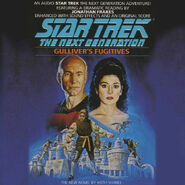 Audiobook cover, digital version
Add an image to this gallery

Retrieved from "https://memory-alpha.fandom.com/wiki/Gulliver%27s_Fugitives?oldid=2452127"
Community content is available under CC-BY-NC unless otherwise noted.