Multiple characters
Gunnel Eriksson (born 1955; age ~66) is a Swedish actress who was a regular background actress on Star Trek: The Next Generation and Star Trek: Voyager who also appeared in Star Trek Generations.

For her first Trek part in the fifth season episode "The Masterpiece Society" in 1991, she filmed her scenes between Wednesday 13 November 1991 and Friday 15 November 1991 on Paramount Stage 16. Eriksson was scheduled to appear as a patient in sickbay in the episode "The Outcast" but was not filmed for this episode. On some call sheets, such as one for the episode "Homeward", she is listed as Gunnel Orbison and Gunnel Oprison.

Eriksson was born in Valla, Sweden and started her career as a model. In 1984 she became Miss Sweden and moved to the United States where she continued her work as model and also started to work as an actress with appearances in television series such as Dallas, Dynasty, Falcon Crest, Murder, She Wrote (1987, episode "Doom with a View", with Michael Horton, Monte Markham, Faith Burton, Walter Smith, and Debra Dilley), and Baywatch. 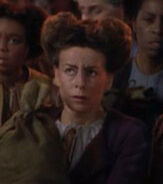