Guy Richardson (born 29 April 1954; age 66) is an actor who appeared as a background actor in episodes of Star Trek: Deep Space Nine, Star Trek: Voyager, and Star Trek: Enterprise. He received no credit for his appearances. His costume from the episode "Prodigal Daughter" was later sold off on the It's A Wrap! sale and auction on eBay and was previously worn by actor Fred G. Smith in the Star Trek: The Next Generation episode "The High Ground" as well as by a background actor in the Star Trek: Voyager episode "Random Thoughts". [1] His Romulan military jacket from the episodes "Babel One", "United", and "The Aenar" was also sold off. [2] A costume undershirt tunic worn by him was sold off by the William Shatner store. [3] 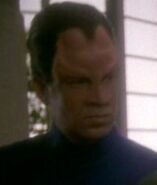 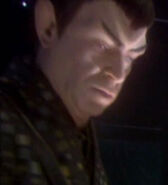 Romulan officer
ENT: "Babel One", "United", "The Aenar"
(uncredited)
Add an image to this gallery

Retrieved from "https://memory-alpha.fandom.com/wiki/Guy_Richardson?oldid=2415733"
Community content is available under CC-BY-NC unless otherwise noted.