The Hall of Warriors was an ancient meeting hall in or near the present headquarters of the Klingon Defense Forces on Ty'Gokor. The Hall was lined with giant statues of famous warriors from Klingon history, such as Rurik the Damned. According to Worf, you could smell the blood of history in the Hall's stones. (DS9: "Apocalypse Rising")

Arne Darvin dreamed that he would have a statue in the Hall of Warriors after he went back in time to assassinate Captain James T. Kirk. Believing that Klingon statues tended to be rather "generic," it was his intention to have a statue that would "capture my essence." He imagined being depicted holding Kirk's head in one hand and a tribble in the other. (DS9: "Trials and Tribble-ations")

According to the script for "Apocalypse Rising", the Hall of Warriors has "a vast, vaulted church-like chamber with towering columns carved into statues of famous Klingon heroes. The Klingons use it as a combination assembly hall, holy shrine and banqueting chamber."

The scripted description of the Hall continues, stating, "The center of the room is dominated by a large platform containing a brazier burning an eternal flame. On either side of the brazier are racks on which hang Commendation Medals, sigils of the order of the Bat'leth and other military regalia."

Upon Benjamin Sisko's arrival to the Hall of Warriors, the script states, "As [he] looks at [his] surroundings, he feels like Sir Richard Francis Burton in Mecca," as he was "one of the few Starfleet officers to view this sacred place of the Klingons."

The various statues in the Klingon Hall of Warriors were designed to give an overview of Klingon history, with the statues representing the heroes of different eras; for example, both Kahless and Chang are included. John Eaves, who designed the statues, also created several new characters, and in his design he tried to concentrate on the garments worn so as to give a sense of evolution leading into the modern Klingon warrior uniform seen throughout TNG and DS9. (Deep Space Nine Sketchbook: John Eaves, DS9 Season 5 DVD, Special Features) Eaves designed the statutes under the direction of Herman Zimmerman and Randy McIlvain. (Star Trek Encyclopedia (4th ed., vol. 1, p. 324)) 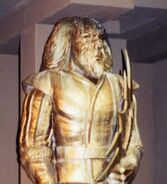 Star Trek: The Magazine Volume 2, Issue 10, pp. 74-77, suggested statues of Kang, Sompek, Kahless the Unforgettable, and the Lady Lukara "stand sentinel at the four corners of the room," though also listed Rurik the Damned among the four statues.