Humanoid hands tended to vary with both number of hands and number of digits on each hand: Voth and a species from Tau Alpha C had three fingers per hand, while Humans had five; as well, Edosians had three hands, while Terellians, and a pianist on Qualor II, named Amarie, had four hands.

Vulcans seem to place more significance on their hands than humans, possibly because they use their hands to mind-meld, which is taken very seriously in Vulcan society. Vulcans press their fingers together as a gesture of affection, akin to a kiss (First seen in Journey to Babel).

In 2151, Doctor Phlox treated Crewman Alex, who had first-degree burns on his right hand, from the seal of a nitrogen valve having blown when he had been trying to reroute the valve. The hand injury (and a similar burn on Alex's forehead) was treated with dermaline gel. (ENT: "Dear Doctor")

In the writers' first draft script of ENT: "Dear Doctor", this scene instead involved Trip Tucker having a laceration on his hand that was initially covered with a rag. Tuker's injured hand was about to be bandaged by Doctor Phlox when the sight of blood in the wound caused a large, tough-looking engineering officer who was standing nearby to suddenly faint, so Phlox then switched his focus to the felled giant.

In 2267, the being who claimed to be the Greek god Apollo captured the USS Enterprise by generating a powerful force field in the shape of a giant green hand. This encounter was one of several witnessed by the tardigrade "Ephraim" during her attempts to be reunited with her eggs. A legend of a similar giant green hand was told in the alternate reality as one of the possible causes of the disappearance of the USS Franklin. (TOS: "Who Mourns for Adonais?", ST: "Ephraim and Dot", Star Trek Beyond)

In 2376, observing The Doctor's nude sketches of Seven of Nine in a holodeck fantasy, Captain Kathryn Janeway commented that he drew the hands well. (VOY: "Tinker Tenor Doctor Spy") 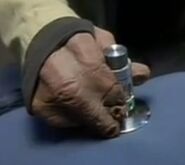 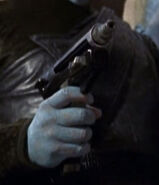