A hangar was a facility for storing aircraft in the 20th century. Such facilities were also used for storing shuttlecraft and starships in the 23rd and 24th centuries.

In 2258 of the alternate reality, cadets were ordered to report to Hangar 1 in San Francisco near Starfleet Academy. (Star Trek)

In 2269, after one of the robot ships was disabled by the IKS Devisor, its cargo was transferred to the USS Enterprise. This cargo, a shipment of the wheat quintotriticale, filled many of the starship's areas, including its shuttlecraft hangars. (TAS: "More Tribbles, More Troubles")

Several hangars were located aboard the USS Enterprise-D. In 2366, hangars 1, 2, 3, 4, and 5 were listed on LCARS displays for shuttlebay operations. (TNG: "Evolution")

Intrepid-class starships had a large hangar located behind the main shuttlebay. Aboard the USS Voyager, this hangar was commonly referred to as Shuttlebay 2. (VOY: "In the Flesh", "Body and Soul")

A hangar on Phylos for the Phylosian fleet 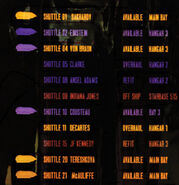 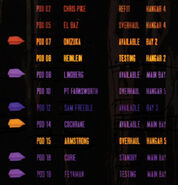 The Delta Flyer under construction in Voyager's hangar

Irina's ship and the Delta Flyer in Voyager's hangar

SC-4 in Voyager's hangar
Add an image to this gallery

Retrieved from "https://memory-alpha.fandom.com/wiki/Hangar?oldid=2439339"
Community content is available under CC-BY-NC unless otherwise noted.