Hank Gartrel is an actor who appeared in two episodes of Star Trek: Enterprise. He played one of the civilian spectators during the launch of Enterprise NX-01 in the first season episode "Broken Bow" and a Takret soldier in the second season episode "The Catwalk". He received no credit for these appearances, but is listed on the call sheets for the episodes. Gartrel filmed his scenes for "Broken Bow" on 5 June 2001 on Paramount Stage 18 and for "The Catwalk" in late October 2002 on Paramount Stage 18. His costume from the episode "The Catwalk" was sold off on the It's A Wrap! sale and auction on eBay. [1] [2]

Gartrel earned a BS in Communications from the University of Idaho and a BS in Mathematics from the University of Oregon. He studied acting at Long Beach City College, the Brian Reese Studio, and the Screen Actors Studio. Beside his work on Enterprise, Gartrel was featured in episodes of The Andy Dick Show, Jimmy Kimmel Live, and CV Nation (2013), [3] in the fantasy comedy The Shaggy Dog (2006, with Mic Rodgers), and the independent film Pumpkin. 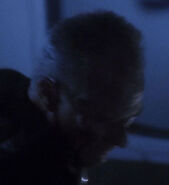 Takret soldier
ENT: "The Catwalk"
(uncredited)
Add an image to this gallery

Retrieved from "https://memory-alpha.fandom.com/wiki/Hank_Gartrel?oldid=2541722"
Community content is available under CC-BY-NC unless otherwise noted.