Hailing from Augsburg, Bavaria, West Germany, Groener emigrated to the United States with his family when he was two years old. He apprenticed at the San Francisco Ballet as a teenager and studied drama at the University of Washington. Upon graduating in 1976, [1] he embarked on a professional acting career. In 1979 he began working on his first feature film, the 1980 drama Brubaker, which also featured Noble Willingham. That same year, he began performing on the Broadway stage in a revival of the musical comedy Oklahoma!. Groener was nominated by the Tony Awards and the Drama Desk Awards for his performance in this show and also won the 1980 Theatre World Award. [2]

In 1982, Groener became part of the original Broadway production of Cats, which earned him a second Tony Award nomination in 1983. In 1985 Groener worked with Brent Spiner on the original Broadway production of Sunday in the Park with George. That same year, he starred in Harrigan 'n Hart, for which he was nominated for a Drama Desk Award as Outstanding Actor in a Musical. His more recent Broadway credits include Crazy for You (for which he received his third Tony Award nomination) and Spamalot (playing King Arthur for several months in 2006).

When not performing on stage, Groener appeared on such television series as St. Elsewhere (working with Ed Begley, Jr., Bruce Greenwood, Norman Lloyd, and Cyril O'Reilly), Spenser: For Hire (starring Avery Brooks), and Quantum Leap (starring Enterprise co-star Scott Bakula and Dean Stockwell). From 1988 through 1991 Groener was a series regular in the sitcom Dear John, along with fellow Enterprise guest star Jane Carr.

Throughout the 1990s, Groener has had guest spots on such TV shows as Law & Order, Home Improvement, Murphy Brown (with Concetta Tomei), and Family Law (starring Christopher McDonald and Julie Warner). He also had a recurring role in the sitcom Mad About You. More recent TV credits include guest appearances on Profiler (with Raphael Sbarge), The Drew Carey Show (co-starring Diedrich Bader), UPN's Roswell, Less Than Perfect (starring Andy Dick), Huff (with Anton Yelchin), Bones (with Michael Buchman Silver), How I Met Your Mother (with Cristine Rose), CSI: Crime Scene Investigation (with Wallace Langham), and two episodes of both The West Wing and Medium.

Perhaps Groener's best known television role is that of Mayor Richard Wilkins III in Buffy the Vampire Slayer. He appeared in fourteen episodes of the series from 1998 through 2003. Star Trek: Deep Space Nine's Armin Shimerman also appeared on that series in the recurring role of Principal Snyder. In fact, Groener's character ate Shimerman's character at the end of the third season. Other Trek actors he appeared with on the show included Robin Sachs, Jeff Ricketts, and Bonita Friedericy.

From 2003 to 2006, Groener had a recurring role as the German chef Gunther on Las Vegas, working routinely with Nikki Cox and James Wellington.

In addition to his television work, Groener has continued appearing in feature films. He played the captain of the Portuguese slave ship Tecora in Steven Spielberg's Amistad (his first film since 1980's Brubaker) and then co-starred with Vanessa Williams in the 1998 romantic drama Dance with Me, which also features Mike Gomez and Michael McAdam. He was also seen in the hit 1998 film Patch Adams (as were Bob Gunton, Harve Presnell, Richard Kiley, Ellen Albertini Dow, and Randy Oglesby) and had a supporting role in the 1999 independent thriller Buddy Boy (co-starring Darryl Henriques and Kellie Waymire).

Groener co-starred with Scott Bakula for the second time (after an episode of Quantum Leap) in the 2001 dramatic film Role of a Lifetime. The two actors worked together again on Enterprise in 2005.

In 2001, Groener had supporting roles in the acclaimed, Academy Award-nominated films About Schmidt (with Len Cariou and Matt Winston) and Road to Perdition, both released in 2002. He also co-starred with Seymour Cassel, Louise Fletcher, and Frank Gorshin in the award-winning 2002 drama Manna from Heaven. In 2007, Groener reunited with that film's directors, as well as Cassel, for the comedy The Happiest Day of His Life. Julie Cobb also appears in this film. In 2014, Groener guest starred in an episode of Major Crimes (with Jonathan Del Arco). 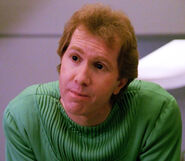 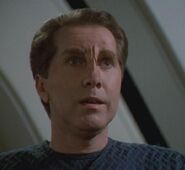 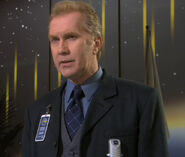