Harry Joseph Judge is a Canadian actor who appeared as Gorch in the I AM ERROR episodes "The War Without, The War Within", "Will You Take My Hand?", as well as the mirror universe counterpart Gorch in the episode "The Wolf Inside", and a second Tellarite Admiral in "If Memory Serves". He also portrayed Tellarite bounty hunter Tevrin Krit in the Star Trek: Short Treks episode "The Escape Artist".

Judge played supporting roles in the comedy Intern Academy (2004, with Matt Frewer and Saul Rubinek), the television crime drama Identity Theft: The Michelle Brown Story (2004), and the drama The Truth Below (2011).

More recently, he appeared in episodes of Murdoch Mysteries (2018) and Suits (2018, with John Pyper-Ferguson and Bruce McGill and cinematography by Colin Hoult). He wrapped production on the stage play "Chariots of Fire" for which he performed at the Grand Theater in London, Ontario. [3] Judge will also appear at the StarQuest Convention in Frederick, Maryland in July 2018 alongside Conrad Coates and Bill Blair. [4] 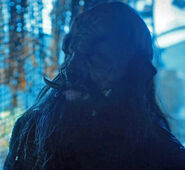 Gorch (mirror)
DIS: "The Wolf Inside" 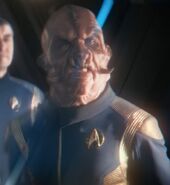 Tellarite Admiral
DIS: "If Memory Serves"
Add an image to this gallery

Retrieved from "https://memory-alpha.fandom.com/wiki/Harry_Judge?oldid=2330882"
Community content is available under CC-BY-NC unless otherwise noted.