Harry Young is the actor who appeared as a science division officer in several episodes of Star Trek: The Next Generation. As a background actor he received no credit for his appearances and was identified by the call sheet for the episode "The Host". He also filmed a corridor scene for the episode "Night Terrors" and was scheduled to appear in the scenes in the cave in the episode "Silicon Avatar" but was either cut or not filmed. 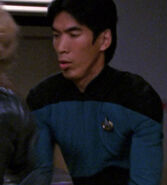 Retrieved from "https://memory-alpha.fandom.com/wiki/Harry_Young?oldid=2415147"
Community content is available under CC-BY-NC unless otherwise noted.