Heather Ferguson is a former actress who worked as background actress on Star Trek: Deep Space Nine, Star Trek: Voyager, and Star Trek: Insurrection. She also worked as stand-in and sometimes under heavy prosthetics. Ferguson received no credit for her appearances.

Beside Star Trek, Ferguson appeared in several other television series such as JAG and Babylon 5 and in the comedy Sgt. Bilko (1996, with Pamela Adlon, Steve Kehela, Richard Herd, Henry Hayashi, Clifton Collins, Jr., and Andrea C. Robinson). Other projects include television commercials and informercials.

Today, Ferguson is working as a teacher in computer skills and occasionally a camera operator for MTSAC college video crew. 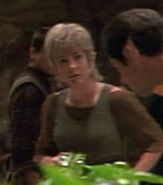 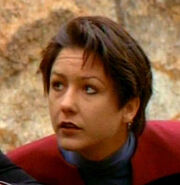 Ferguson as an Ocampa in "Caretaker"

Ferguson on the Voyager set

Ferguson with Tim Russ
Add an image to this gallery
Retrieved from "https://memory-alpha.fandom.com/wiki/Heather_Ferguson?oldid=2420257"
Community content is available under CC-BY-NC unless otherwise noted.