The helmsman (or helm officer) was the Starfleet crewperson who operated the helm console on 22nd and 23rd century Federation starships.

The helmsman of those vessels worked in concert with the navigator, who plotted the ship's course. On the USS Enterprise, the helmsman controlled both the speed and attitude of the ship, as well as the ship's weapon and shield systems. Other spacefaring services use the term helmsman also, the 22nd century Earth Starfleet for one, but it isn't clear if there is the same relationship with a navigation console, since vessels like Enterprise NX-01 had a single helm station.

In 2293, Lieutenant Valeris explained her presence on the bridge of the USS Enterprise-A by saying that she'd heard they needed a helmsman and she had volunteered for the position. (Star Trek VI: The Undiscovered Country)

By the 24th century, the helm and navigation stations became combined as the flight control officer position. Also, control of weapons and defenses is usually handled by the tactical station or the operations officer, rather than their 23rd century equivalents, under the control of the helmsman.

Nevertheless, the terms of the position remained during this period. In 2368, William T. Riker was in disagreement with Ro Laren with a procedural change she implemented on her own merit, which he protested, stating "Navigators on this ship have been doing flight handling assessments the same way for years, Ensign." A short time later, she was identified in the ship's crew manifest as the ship's helm officer. (TNG: "Conundrum")

In 2364, Jean-Luc Picard described his execution of what would later be named the Picard Maneuver as being "what any good helmsman would have done." (TNG: "The Battle")

In 2375, after hearing how Hector Ilario had piloted the USS Defiant into a crowd of half a dozen Jem'Hadar attack ships and was the sole survivor of the melee, Miles O'Brien described him as a born helmsman, to shouts of agreement from all around them. (DS9: "Field of Fire") 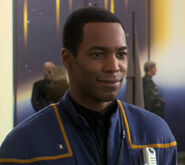 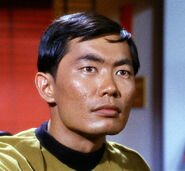 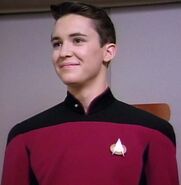 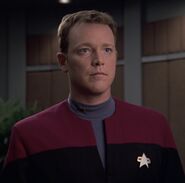