J'Dan
Forra Gegen
Quarren
Henry Woronicz (born 24 November 1954; age 67) is an actor who played J'Dan in the Star Trek: The Next Generation fourth season episode "The Drumhead", and Forra Gegen in the Star Trek: Voyager third season episode "Distant Origin" and Quarren in the fourth season episode "Living Witness". His undersuit padding lot from "Distant Origin" was sold off on the It's A Wrap! sale and auction on eBay. [1] Woronicz filmed his scenes for the episode "The Drumhead" on Friday 22 February 1991 and Wednesday 27 February 1991 on Paramount Stage 9.

Between 1991 and 1995 he was the Artistic Director and a regular actor at the Oregon Shakespeare festival. 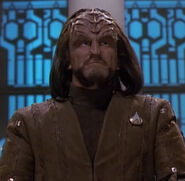 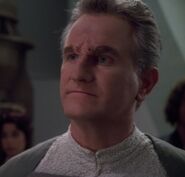