The following is a list of spacecraft depicted in holographic form (or simulations of a similar nature). 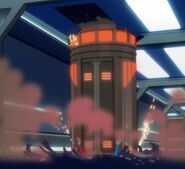 In 2380, Ensign Beckett Mariner, in her role as Vindicta for her self-made holodeck movie, had a type of boarding pod attached to her ship, which enabled her, Bionic 5, and Tendi to board the USS Cerritos. After the pod cut a opening in the Cerritos's hull, an airlock dropped into the corridor, where it crushed Lemonts and Winger Bingston, Jr.. (LD: "Crisis Point")

This runabout was part of the holodeck training program Borg Encounter. In it the runabout arrived to rescue Brad Boimler from a Borg cube. (LD: "I, Excretus")

This Danube-class runabout was piloted by Nog in preparation for his stress reaction test. His flight was interrupted when Jake Sisko appeared knocking and waving to him outside the main viewing window while the runabout appeared to be warping through space. (DS9: "Facets")

This Type 8 shuttlecraft was used by Tom Paris to teach Kes how to pilot a shuttle. (VOY: "Parturition")

This Class 2 shuttle was a simulated vehicle used by Tom Paris for the warp 10 test that was later conducted on the shuttle Cochrane. (VOY: "Threshold")

This Class 2 shuttle was a part of the holoprogram Insurrection Alpha. It was flown by Tom Paris and Captain Kathryn Janeway on a mission to visit the Rukani.

Upon returning to the USS Voyager, which had been commandeered by Chakotay, the shuttle attacked Voyager before being destroyed. (VOY: "Worst Case Scenario")

This shuttle was the vehicle upon which The Doctor learned basic piloting skills from Tom Paris. (VOY: "Message in a Bottle")

This shuttle was only mentioned in dialogue.

This Class 2 shuttle, flown by a holographic pilot, was part of B'Elanna Torres' orbital skydiving simulation she visited in 2375. (VOY: "Extreme Risk")

Scenes aboard this shuttle were filmed on Monday 29 June 1998 on Paramount Stage 9.

This Type 6 shuttlecraft, a recreation of one of Voyager's shuttlecraft, was used on Voyager Holodeck 2 to determine the reason why their shuttle mission to collect protomatter failed. It was here that Neelix also observed his own death. (VOY: "Mortal Coil")

This Borg cube was the setting of the holodeck training program Borg Encounter. In it, Brad Boimler had to escape. Several instances, he escaped using a Borg sphere that was docked inside. (LD: "I, Excretus")

This Borg sphere was one method of escape from the Borg cube on which the holodeck training program Borg Encounter was set. Upon first seeing it, Brad Boimler described it as an "escape sphere", which he used on several instances, before changing his method of escape to a runabout. (LD: "I, Excretus")

In Tom Paris' holonovel series The Adventures of Captain Proton, the titular character piloted a rocket ship that was equipped with a destructo beam. (VOY: "Night", "Bride of Chaotica!")

A Galor-class parked outside the compound.

A Galor-class parked outside the compound.

This Cardassian ship appeared in the Section 31 holoprogram run by Luther Sloan on Julian Bashir in 2374.

The ship, which carried Weyoun 5, beamed Bashir aboard from Deep Space 9 as part of their extraction of him after the supposed "Dominion spy" was discovered. As the ship traveled at warp, it was engaged by the USS Defiant, which recaptured Bashir. (DS9: "Inquisition")

This refit Constitution-class starship was the setting of the holoprogram The Good of the Many. (LD: "I, Excretus")

These Jem'Hadar fighters were part of the holodeck simulation created by Tom Paris for Kes. (VOY: "Parturition")

This is the first reference to the Dominion on Star Trek: Voyager, and the only appearance of their vessels in the series.

...and a fourth arrival

These three Klingon Birds-of-Prey were used in the revised Kobayashi Maru scenario holoprogram. Following their defeat, a fourth Bird-of-Prey decloaked and continued the attack, but Spock was able to beam himself and Dal over to the ship and incapacitate the bridge crew. (PRO: "Kobayashi")

Due to the use of archive audio, these vessels were identified under varied designations, including "Klingon warships", "Klingon ships", and a "Klingon battle cruiser".

These three K't'inga-class battle cruisers were used in the Kobayashi Maru scenario. (Star Trek II: The Wrath of Khan)

This Romulan warship appeared to go along with the sensor ghosts remotely created by Worf while aboard the USS Hathaway in order to trick the sensors aboard USS Enterprise-D into believing that it was under attack by the Romulans during Operation Lovely Angel in 2365.

Worf later arranged a similar strategy to fool the sensors of the Kreechta into believing that another Federation starship was on an intercept course following the perceived destruction of the Hathaway. (TNG: "Peak Performance")

Projections of these Talaxian ships, along with The Doctor, were broadcast into space by Voyager as it battled several Kazon-Nistrim Predator-class warships. (VOY: "Basics, Part I")