←
Unknown (2154)
→
Once Enterprise finally returns to Earth, the weary crew face repercussions from their journeys, both positive and negative.

Carrying the senior officers of the Enterprise NX-01, a shuttlepod swoops down from orbit to the Bay Stadium, overlooking the Golden Gate Bridge. A ceremony celebrating Enterprise's success in the Delphic Expanse pays tribute to the heroic crew, although Captain Jonathan Archer says in a speech that it's important to remember the heroes who didn't make it back, the 27 crewmates who died on the mission without whom none of them would have made it home alive. A crowd of thousands gratefully applauds their efforts which saved Earth from the Xindi weapon.

Archer, dressed in civilian clothes, walks into a bar and meets up with Hernandez. She is not only Archer's former love interest, she is also a Starfleet captain, preparing to command the upcoming Columbia NX-02. The two discuss the upcoming debriefing and how the people of Earth have been waiting at knife-point for the last year, not knowing if the Xindi would return and succeed in destroying the planet.

On Enterprise, which is undergoing an extensive repair and refit, Commander Trip Tucker enters T'Pol's quarters and mulls his options for shore leave – with his hometown in Florida destroyed, he has nowhere to go. T'Pol invites him to join her on a trip to Vulcan, which she hasn't visited in many years; Tucker accepts, leaving to pack his bags.

Archer visits Hernandez aboard Columbia, still being prepared for its maiden voyage. He recommends she make several changes to the ship before leaving, based on his starship experience. Archer notes the ship's new weapons upgrades, recalling how he once naively opposed weapons on Enterprise to the designer of the NX-class, Captain Jefferies, as they might deter from any first contact missions.

As Archer is debriefed by Starfleet Command and the Vulcan High Command, the topic drifts to the trellium-infected Vulcan ship Seleya encountered by Enterprise in the Expanse. When Ambassador Soval insinuates that Archer destroyed the vessel without doing enough to help the delusional crew, Archer becomes outraged, blaming the High Command for not providing enough assistance in their mission, saying that he received more help from the Andorians than from the Vulcans. Admiral Forrest later chews Archer out for his behavior, and the captain refuses to apologize. Forrest suspends the debriefing and forcefully orders Archer to take some time off to clear his mind.

Back on Enterprise, Doctor Phlox, toting a large array of travel bags for his vacation on Earth, is warned by Lieutenant Malcolm Reed about the heightened level of xenophobia on Earth in the aftermath of the Xindi attack; Phlox dismisses the warnings and continues to the surface.

In a beautiful wilderness retreat, as Archer prepares to go rock climbing, Captain Hernandez suddenly appears, offering to join him, to Archer's chagrin.

Arriving on Vulcan, T'Pol leads Tucker into the house where she grew up. Her mother T'Les greets them, surprised to see that T'Pol has brought a guest – a Human guest, moreover. She informs T'Pol that she has "retired" from her teaching position at the Science Academy. She also shows T'Pol a letter from Koss, T'Pol's fiancée since childhood; however, much to her mother's chagrin, T'Pol expresses no interest in seeing Koss.

High up in the hills, Archer and Hernandez discuss his new hero status, Starfleet politics, personnel issues, and encounters made by Enterprise in the past three years. Herself eager to explore the galaxy, Hernandez finds Archer a significantly changed man, not as "gung ho" about space exploration as he once was.

Early the next morning, T'Pol awakens Tucker at four o'clock so that they, as guests in the household, can prepare the morning meal (another Vulcan tradition). While eating, T'Les is unhappy with many of the changes she notices in her daughter, such as T'Pol's unwillingness to marry Koss as well as her plans to join Starfleet.

In a bar on Earth, crewmates Reed, Ensign Travis Mayweather and Phlox enjoy their new-found celebrity, until they are confronted by a nasty bar patron exhibiting the very xenophobia they had heard of. When the man strongly urges Phlox to leave the establishment, Reed and Mayweather come to their friend's defense; a brawl ensues. About to be attacked himself, Phlox expands his face to three times its normal size, an instinctive defensive posture (much like a puffer fish in Earth's seas), scaring away the troublemakers. Afterward, the unsettled Phlox munches on a pretzel to calm his nerves.

T'Les confronts Tucker about being in love with her daughter, a point he reluctantly concedes. As he adjusts a field generator to fix T'Les' stasis unit, Tucker answers a knock on the front door; it is Koss, asking to speak to T'Pol. When alone with T'Pol, Koss expresses his interest in going forward with the marriage, for traditional reasons more than anything else. T'Pol tries desperately to dissuade him, hinting at her "sickness" (either Pa'nar Syndrome or trellium poisoning), even suggesting the kal-if-fee, a fight to the death – to no avail. Koss tells T'Pol that if she goes forward with their marriage, he will have T'Les reinstated at the Science Academy, hinting that her retirement wasn't voluntary.

When T'Pol asks her mother about the circumstances of her retirement, T'Les reveals that she retired to halt an inquiry into her alleged criminal behavior; the trumped up charges were retribution for T'Pol's actions which partially led to P'Jem's destruction. Since T'Pol was aboard Enterprise and untouchable, the Vulcan High Command punished her mother instead.

Back in the mountains, Archer has a frightening dream, in which he is attacked on the mountainside by Xindi-Reptilians and is thrown off the mountain by them. Awakening with a start, he admits his guilt over some of his actions while in the Expanse and feels like he lost something, no longer feeling like the explorer he was three years ago when Enterprise first launched. Hernandez offers to help, kissing Archer, and rekindling their romance.

T'Pol gives Tucker a tour of a Vulcan lava field, which resembles Earth's Grand Canyon, yet with giant statues ringing the valley. Tucker offers to show her sights of Earth to return the favor. Afterwards, she tells him of her plans to go forward with the marriage to Koss in order to restore her mother's position; Tucker angrily storms off.

Back on Enterprise, Phlox informs Hoshi Sato that the Xindi neural parasites that Dolim injected her with are almost completely gone from her brain. To celebrate, she invites him to Madame Chang's for their famous egg drop soup, but he pretends to be too busy caring for an ailing osmotic eel. Having spoken to Mayweather about the bar fight, she knows the true cause of his reluctance to return to the planet's surface. She urges him to stand up to the prejudice; when he sadly declines to join her, she promises to bring him take-out.

Once Archer and Hernandez return from their climbing trip, Archer continues the debriefing at Starfleet Headquarters. After it is concluded, he apologizes to Soval for his prior outburst. Soval, who opposed Archer's appointment to Enterprise, now acknowledges that he himself was in error; while some of the captain's actions were morally questionable, he says, they were necessary to save Earth, as well as Vulcan. Remarkably out of character (for a Vulcan), Soval thanks Archer, shaking his hand in friendship.

Tucker has donned T'Pol's father's Vulcan attire for the wedding ceremony. At the last minute, T'Les urges Tucker to divulge his true feelings to her daughter; Tucker declines, reasoning that T'Pol already has enough pressure on her as it is. Stunned at his selflessness (which reveals the depth of his love), T'Les walks away, wondering herself if T'Pol is really doing the right thing or not. Arriving at the ceremony, Tucker compliments T'Pol on her beautiful purple wedding gown; kissing him delicately on the cheek, she proceeds to the ceremony, as Tucker stands near, quietly and regretfully watching the wedding.

"I've been told that people are calling us heroes. When it comes to my crew, you won't get any argument from me. But I think it's important that we remember the heroes who aren't with us – the twenty-seven crewmen who didn't make it back. Without their sacrifice, I wouldn't be standing here right now. None of us would. But I'm sure I speak on behalf of my entire crew when I say… it's good to be home."

- Captain Archer's address before the crowd at their "Welcome Home" ceremony

"I had an argument once with Captain Jefferies. He was one of the designers of the NX-class."
"I'm aware of that."
"I told him I didn't want to be in command of a warship trying to make first contact with new species. Jefferies was right. We needed those weapons… and a hell of a lot more."

- Captains Archer and Hernandez, on the bridge of the Columbia NX-02

"You did everything you could to sabotage our mission. I got more help from the Andorians than I ever got from the High Command. This planet would be a cloud of dust right now if we'd listened to you!"

- Archer, to Soval, responding to insinuations that he was negligent in dealing with the crew of the Seleya

"There's more to life than one's profession. Perhaps you'll learn that one day."

"Things have changed since Enterprise left spacedock. You'll spend a lot of your time boldly going into battle."

"If we weren't out there stirring up trouble, seven million people might still be alive."
"You weren't stirring up trouble. You were exploring."
"I'm not sure there's much of a difference."
"What do you suggest? Put our starships in mothballs?"
"No, we need them. But look at the Vulcans. They're not explorers. They keep their ships close to home. Never know who's going to come calling."
"That's not the mission either one of us signed up for."
"Maybe you'll feel differently after you've delivered a few dozen eulogies."

"Are you all right?"
"I'm not even sure what 'all right' means anymore."

"I look at you and I see the person I was three years ago – the explorer that my father wanted me to be. I lost something out there. I don't know how to get it back."

"I'm sorry."
"You're sorry? You brought me sixteen light years just to watch you get married to someone you barely know."

"Ambassador… I want to apologize for what I said to you the other day. I was out of line."
"Yes, you were."
"I'm glad we can finally agree on something."

"Captain… your actions, while being morally questionable, were necessary. I opposed your appointment as captain of Enterprise, but it's obvious now that I was wrong. T'Pol has told me that the Expanse would have someday encompassed hundreds of systems, including Vulcan. You've done a great service for both our worlds. Thank you." 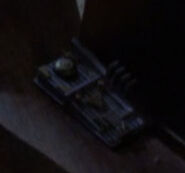 The krellide power cell in "The Andorian Incident" 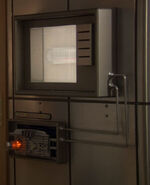 The Vulcan food processor in "Home"